my favorite cards of the year - 1990 edition

i recently introduced my mini collection focusing on my favorite cards from each year that i've been a collector. the basic gist is that i wanted to create a space for the cards that i most appreciated having in my collection in the year that they were released. these were cards that i acquired in the year that they were issued, and that i considered to be my favorites at the time. i have disallowed (most) cards that are already in other mini collections in order to avoid having a mini collection consisting of more steve garvey, double plays, and dodger stadium cards.
1990 may have been the year that i've purchased the fewest cards. i know for certain that i bought a box of topps from a card shop in santa barbara. i also received a complete score set from my dad that year, which he purchased because local boy robin ventura was included in the set, as well as the topps traded set. i didn't even take the shrink wrap off of the score set. other than that, i would be surprised if i bought more than a dozen packs that year. as such, the cards i considered to be my favorites that year came from a limited stockpile. 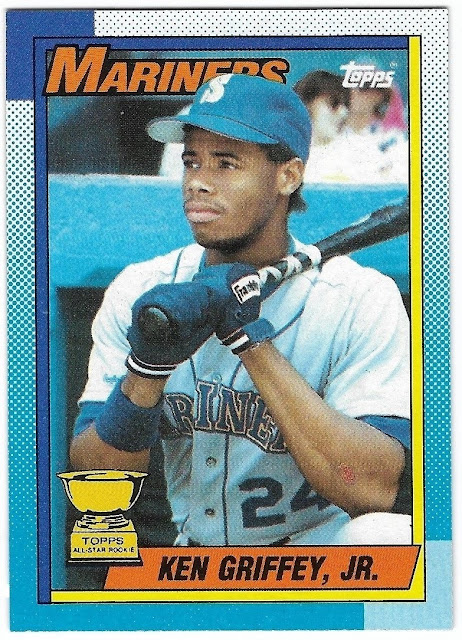 griffey is just over a year older than i am. i followed his exploits during his rookie year of 1989, although i didn't pick up any of his cards other than the topps traded rookie which came in the set that i annually received from my dad. i had purchased a "s" mariners hat in the spring of 1988, and figured i now looked pretty smart to have done so before griffey debuted. anyway, i was happy to see his rookie card in one of the packs i opened. it wasn't until sometime later that i realized that donruss, fleer, and something called upper deck had all issued cards of him in their 1989 flagship sets, meaning that his first non-xrc topps card was really a second year card by all standards. still, i was happy to have this card of the kid in my collection.
favorite dodger card: topps sandy koufax 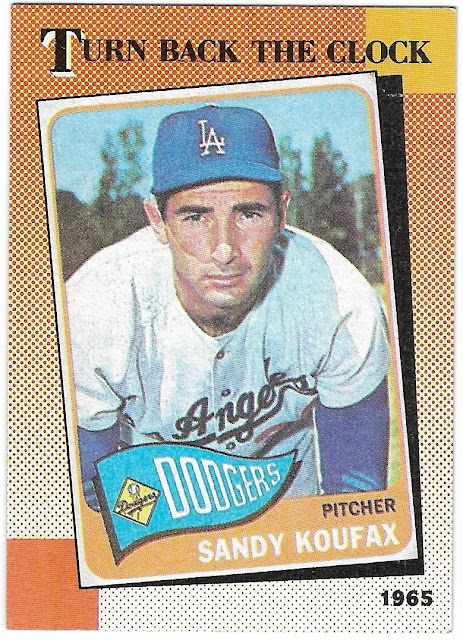 like i said up top, i didn't see a lot of cards in 1990. the dodger cards were pretty uninspiring, aside from tommy lasorda's card which is also in my dodger stadium mini-collection and therefore ineligible for this collection according to the whimsical enforcement of my rules. however, seeing a 1965 topps card included in the set, and having it be sandy koufax's, was a positive.
up next, 2012. stay tuned!
Posted by gcrl at 7:55 PM