based on my records, i only went to six major league baseball games during the 2008 season. i did go to a couple twins games at spring training that year, and i also sat in on some drills at the angels spring training in arizona, but those don't count. during the season i was primarily working in downtown minneapolis so i think i probably should have made it to a few more contests.
i was pretty excited to learn about the 2008 upper deck documentary set that came out late in the year. the idea of a set with a card for every game played by every team (a home and away version) was awesome. unfortunately, the set failed in a big way due to the limited number of photos used for each team - a decision that often resulted in a disconnect between the player pictured and the events of the game. some of you might recall that the guy who was in charge of the set had a blog for a short time and was often critical of the industry, although i seem to remember him being surprised at some of the backlash regarding this set. it was a huge undertaking, no doubt, and i have many of the dodger cards from the set.
unfortunately, i did not see the dodgers that year. instead, i saw the twins play six times. here are the cards from those games that i keep in my "cards featuring games i attended" mini-collection:
april 3 - angels at twins 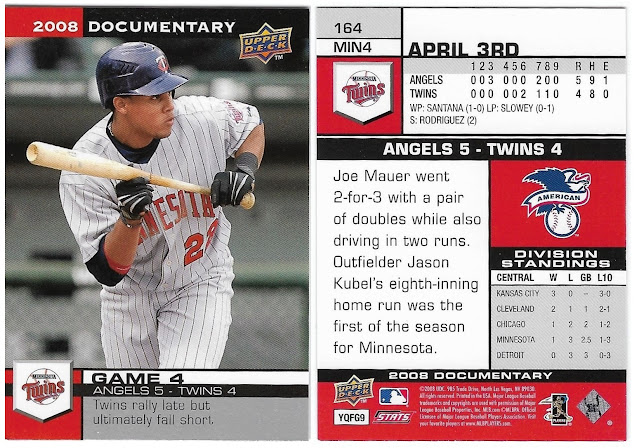 i failed to make it to opening day, but i still made it to a game during the first homestand matchup of the season. this was a getaway day game at the metrodome, and in addition to the highlights listed, i saw torii hunter hit his first non-twins home run of his big league career. hunter also signed my son's twins yearbook before the game.
april 5 - royals at twins 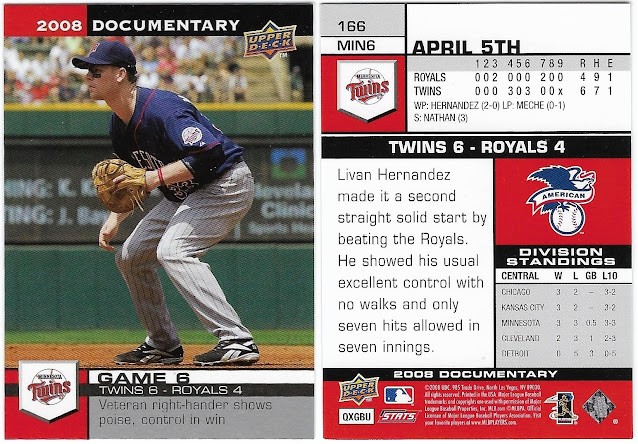 i was back at the dome two days later to see the royals. livan hernandez got the win, but he wouldn't finish the season with the team. he started the season 6-1 with a 3.90 era for the twinkies, but was 10-8 with a 5.48 era when he was claimed off of waivers by the rockies in august.
may 19th - rangers at twins 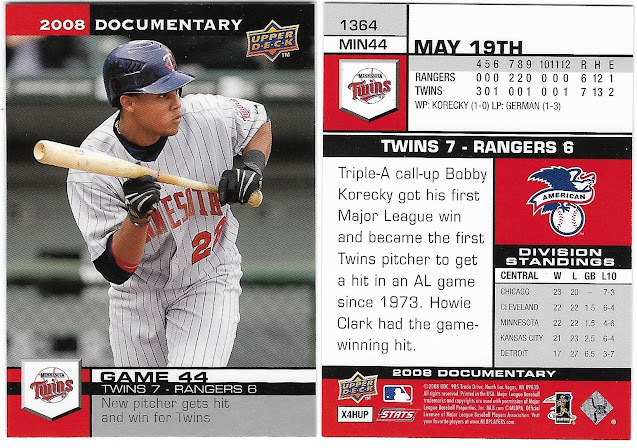 i do remember bobby korecky pitching for the twins in this one and getting his first and only big league hit as well. ron gardenhire pinch hit for shortstop adam everett in the bottom of the 9th, and after the twins tied the game, he moved his dh (brendan harris) to short and so lost the benefit of the dh. howie clark, the eventual hero of the game, also entered the game at that time since gardy also pinch-hit for his second baseman in the 9th. i think gardy ran out of players and so chose not to pinch-hit for korecky in the 10th. it turns out that korecky retired with a perfect 1.000 batting average - just like roy gleason!
august 3 - indians at twins 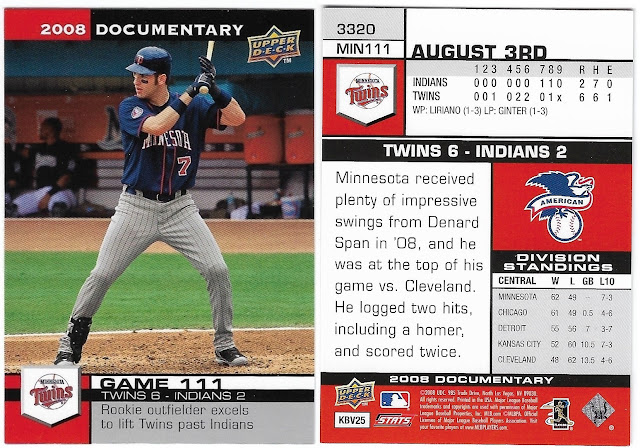 the twins won 15 of 17 games in late june/early july to climb in the standings, and they were tied with the white sox at the start of this game. denard span did do those things written about him on the back of the card, but this game was all about francisco liriano for the first six innings as he held the tribe scoreless while he was on the mound.
august 13 - yankees at twins 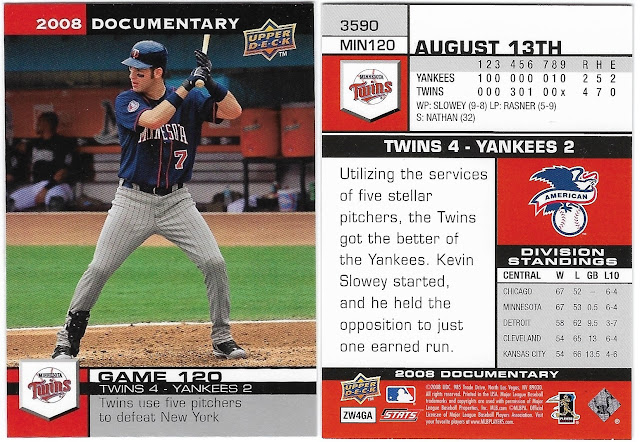 this was another day game at the dome that i left work to attend, and this time i had my son with me.
delmon young's 3-run home run in the fourth was all the twins needed. joe mauer stole a base, which was a rarity. derek jeter didn't play, but yankee legends ivan rodriguez and richie sexson did. the thing i remember most about this day was that my son came to work with me in the morning via mass transit, and when we tried to catch the outbound bus after the game, the driver didn't even stop. good times.
so that's it for my games at the metrodome. i did say i saw the twins play six times, though. the other time was in seattle...
august 6 - twins at mariners 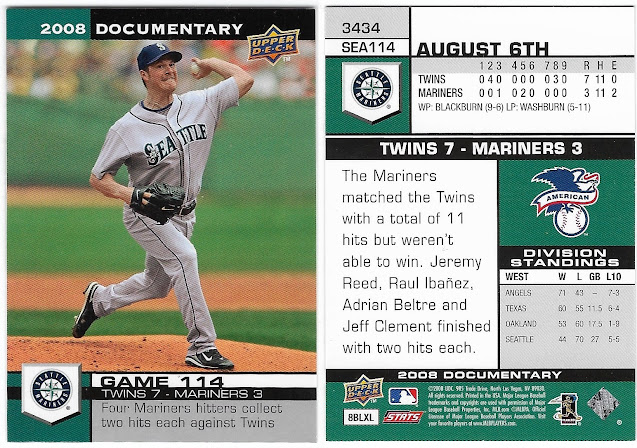 i was working in portland on a project, and was there off and on throughout the year. on this trip, i was able to manipulate my schedule such that i would fly home on wednesday night from seatac instead of pdx. so, on wednesday morning, i drove from portland to seattle to see the twins on the road. it was just a coincidence that the twins were the visiting team - i would have done this regardless of the opponent. anyway, denard span drove in four runs for the twins, but what i remember most was seattle native mike redmond getting the start behind the plate in place of joe mauer. some of his buddies were in the stands not too far from where i was sitting and he talked with them before the game and was nice enough to sign my son's twins yearbook after his visit.
here's a photo of yours truly from that day 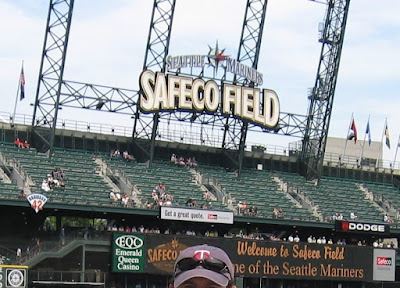 it's my hat, at least. you'll notice jackie robinson's retired number on display towards the left of the photo. that was not by mistake as i mentioned in an earlier stadium related post that i try to seek out the retired numbers at every stadium i go to.
here's the first pitch (or the immediate aftermath) 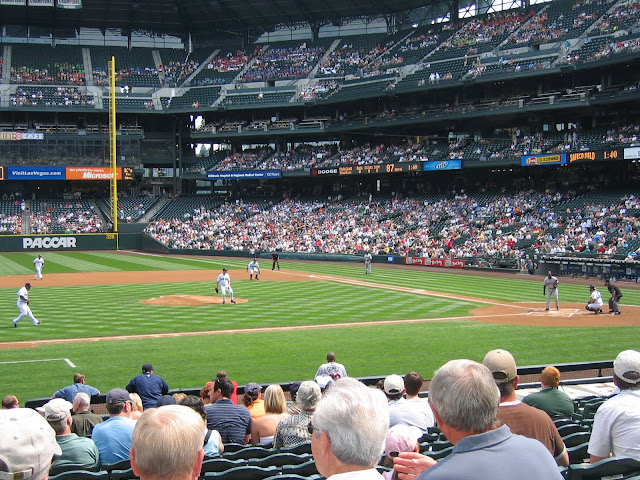 denard span faked a bunt, so adrian beltre came in on the grass.
here's the mariners' lead off hitter, ichiro 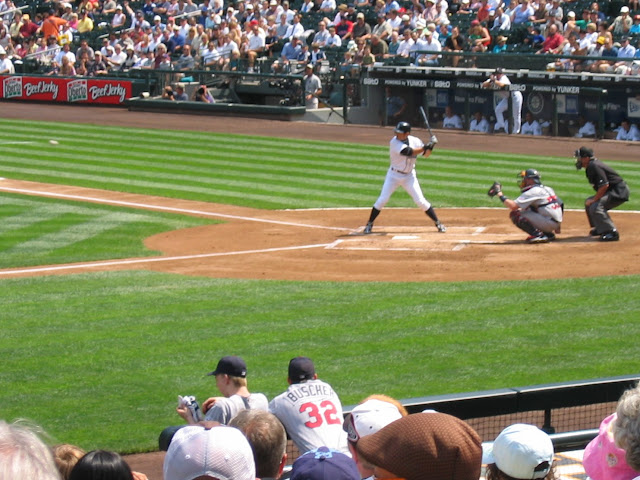 in the bottom of the first. i didn't take any photos after that. i just sat back and enjoyed outdoor baseball for a change.
that was (so far) my only visit to safeco field (now known as t-mobile park), and it took place 13 years ago this week. i thought it was great. the roof was open, the sky was blue, and the beer was cold.  here's my ticket stub: 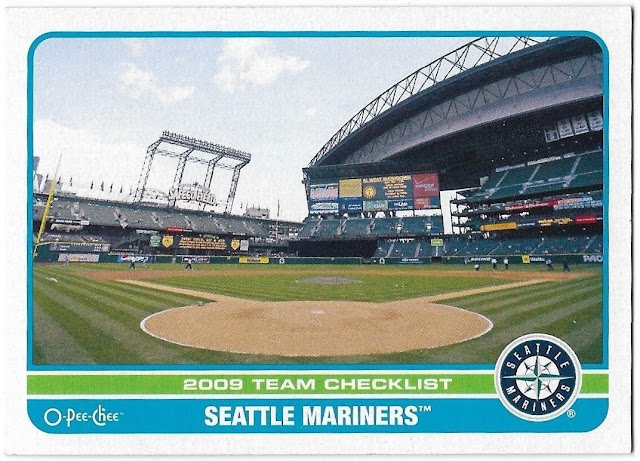 it's the 2009 upper deck o-pee-chee mariners checklist, and it is a good one to have in my "stadiums i've seen a game in" mini-collection.
Posted by gcrl at 7:55 PM