aside from 1978 and maybe 1981, i think 2001 was the year that blew my mind the most when it came to collecting. discovering cards existed in 1978 was obviously the seminal moment in my collecting experience, and having three manufacturers make full sized sets in 1981 was a game changer. however, the sets that were released in 2001 seemed to align with my collecting sensibilities like no other year.
my appetite for retired players appearing in sets had been whetted by upper deck's 1999 century legends offering, and fleer's 2001 greats of the game set, separated now from sports illustrated, was an instant favorite. add to that the inaugural topps heritage, tribute, and archives (yes, topps did three archives sets in the 1990's - 1953, 1954, and brooklyn dodgers - but i am considering those to be different from the set issued in 2001) sets, plus upper deck legends, upper deck vintage, upper deck's ud decade 1970's, and the explosion of game-used cards in sets like leaf's certified materials, and my head was spinning. i am sure i spent more money on those products than i had ever spent on cards before, and i have completed most of those sets that i mentioned (still working on heritage!). still, my favorite set of the bunch was the very first topps tribute set.
that set focused on retired numbers, and subsequent years had themes like hall of famers, perennial all-stars, milestone moments, and the like. i haven't paid a lot of attention to tribute in recent years, but still add some cards to my collection if the opportunity and mood align.  this year, however, i was on the hunt for some tribute cards, as steve garvey was included on the autograph portion of the checklist.
his cards came in base (/199) form 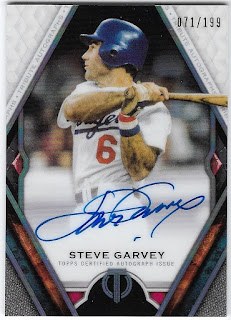 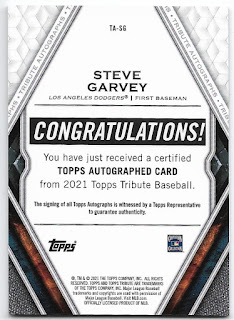 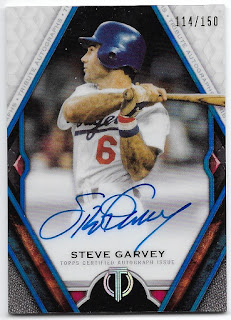 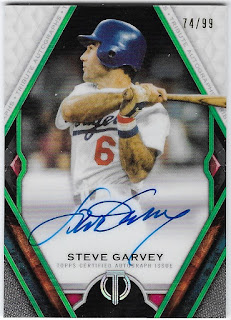 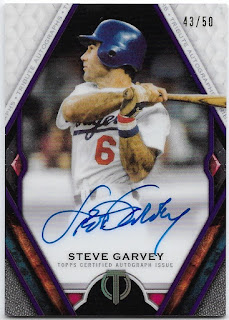 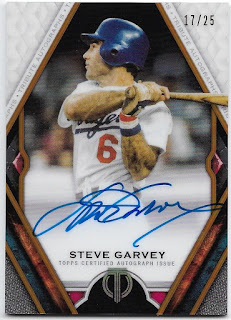 there is also red (/10) which i haven't acquired. yet.
i did score the black 1/1 version though 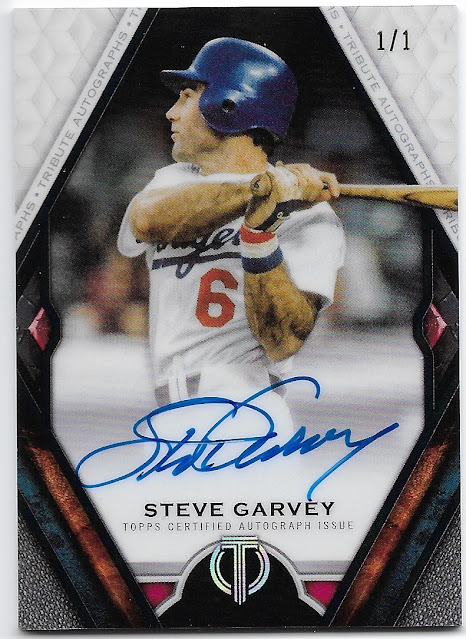 so i will try my hardest to complete the print run with that missing red parallel and possibly a printing plate.
i was disappointed that garvey wasn't included in the 2001 version of tribute even though his number is retired by the padres, but these cards are so fantastic looking that i might just forgive topps for that oversight.
Posted by gcrl at 7:55 PM