take me out to the ballparks

i've never been a season ticket holder in baseball, although i have been part of a season ticket group with some friends for both the mighty ducks of anaheim (during their inaugural season) and the minnesota wild (ditto) of the nhl.  however, i did have a co-worker who was a long-time twins season ticket holder, and i bought in to his group a couple of times in the late 1990's and early 2000's. even without season tickets, i made my way to the ballpark a fair amount of times each season. or so i thought.
i went back and looked and was surprised to find that i only attended two games in 2017, two in 2018, and three in 2019. interestingly enough, both games in 2017 were at new-to-me stadiums, as were two of the three in 2019. i assure you, i am not tired of target field. things just get busy and i didn't make much time to get to the local ballpark those years (although i did see three games there during this timeframe).
anyway, this is going to be a post to document my visits to those three new-to-me stadiums, along with the cards i have in my collection representing them.
on july 31, 2017, i went to a game at the oakland-alameda county coliseum (aka a bunch of other names over the years). they were facing the giants that night, which was great because the crowd was in to the game from the get go. unfortunately, we were a little frazzled from our drive up the coast and i didn't really take any photos. i have this 2019 topps card in my collection 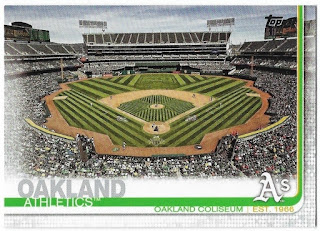 and this digital ticket stub 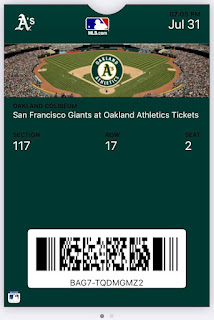 to remember the game by.
the other new stadium i attended in 2017 was nationals park, which i first wrote about here.
in 2019, i was in cincinnati for work in early april and walked over to great american ballpark to see the marlins take on the reds. here's the card representing that stadium in my collection: 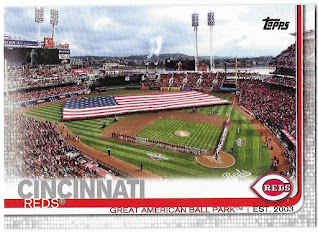 i like the fact that this card was issued the same year that i visited the stadium. for some reason, the a's ticket is still in my digital wallet, but the nationals ticket was not when i went looking for it a couple of years ago. by that time, the reds stub was degraded into this: 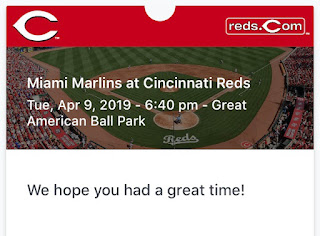 at least it's something. i took a bunch of photos that evening, including this crappy one of the pete rose statue out in front of the ballpark: 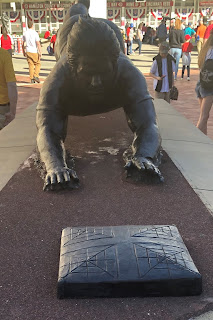 matt kemp was playing, but yasiel puig (remember him?) was suspended.  kemp wound up hitting his only home run as a red that night, which was cool to witness. i splurged on a good seat, and had a great view of kemp doing his pregame stretches 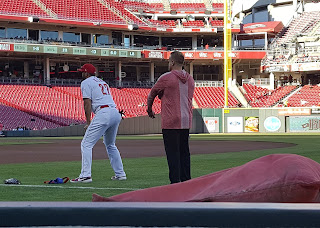 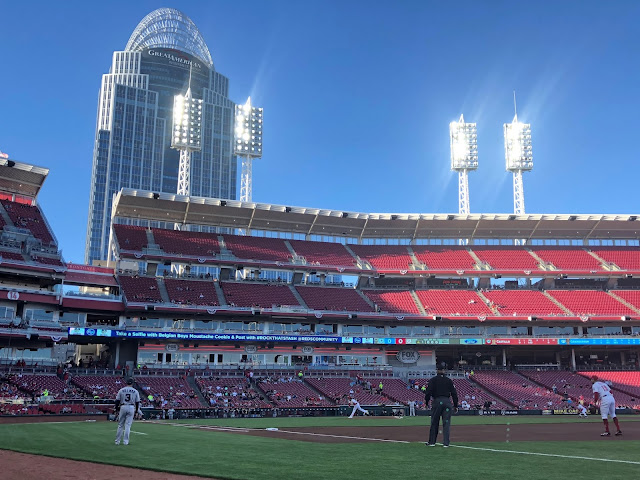 you can see pete rose's retired number 14 at the very left edge of the photo. i realized after the game that i had failed to get a photo of the full run of retired numbers, unfortunately.
here's kemp after his third inning single 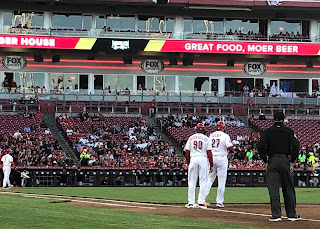 and this one is from after he went yard 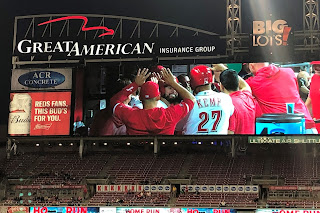 i was too busy standing and applauding to take photos of the actual event. the reds won 14-0, and it was such an offensive barrage - they hit five homers as a team that night - that i was certain there would be a topps now card offered the next day. unfortunately, there was not.
the other new stadium i took in during the 2019 season was chase field in phoenix. i scheduled a stop-over on my way back from the west coast to catch the diamondbacks at home. they played the phillies that night, and i was thankful for the closed roof given the heat. i met daniel from it's like having my own card shop after the game - always fun to meet a fellow blogger. i also have a 2019 topps card in my collection for this stadium: 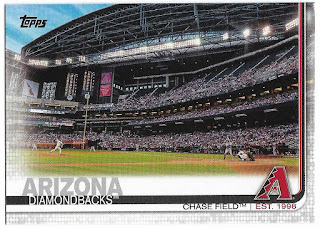 and i have the same ticket stub issue, too: 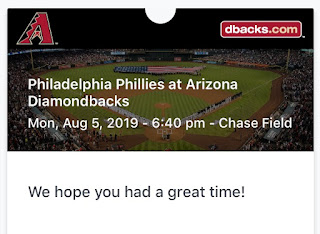 as for photos, i have a few.  here's the first pitch from merrill kelly: 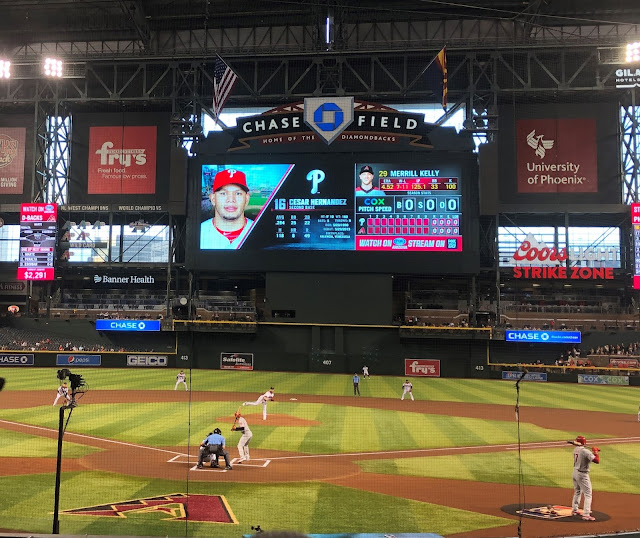 and here are the retired numbers hanging out in right field: 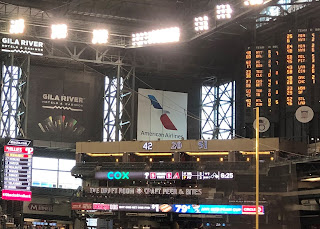 you can also see them on the topps card above if you look really hard. i put a dupe of that stadium card in my 42 collection as a result. the two numbers the dbacks have retired are for luis gonzalez and randy johnson, by the way.
here's a photo from bryce harper's at bat in the first inning 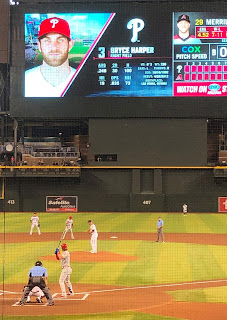 he came oh so close to hitting a homer in that at bat.
i found it funny that they ran a "beat la" ad during the game to promote an upcoming series against the dodgers 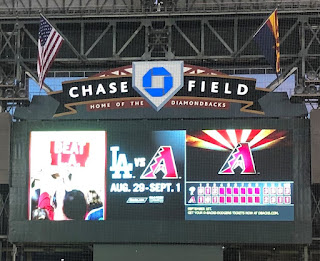 i didn't realize that the dbacks also did races during the game, but they do. they use retired player monstrosities like the a's: 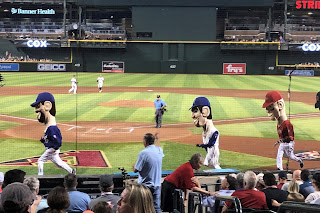 here we have mark grace, gonzalez, and matt williams (i think) trying not to fall over.  the big unit is also one of the players represented, and he later walked through the stands behind me: 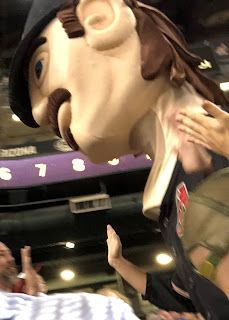 i've now seen these sorts of races in milwaukee (the original - with sausages!), minnesota (they use minnesota wildlife - including a mosquito and the target dog), washington dc (former presidents), oakland (former players), and arizona (former players). do any other stadiums do these sorts of things?
finally, i wasn't wearing a dodger hat, but the mascot gave me what i felt was the stinkeye anyway: 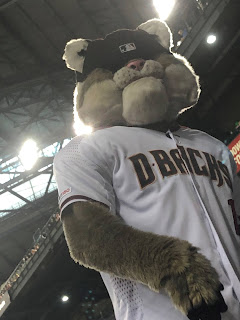 i am thankful that the dodgers are one of the very few teams to not have a mascot. i don't even know what sort of creature a dodger mascot would be if they were to ever decide to go that route. maybe some sort of larry king and mary hart caricatures?
i am always excited to get to a new-to-me stadium, and i'm now down to nine stadiums that i have yet to see a major league game in. i had hoped to get to a couple in 2020, but that obviously didn't happen. fortunately, fans are back in stadiums now, and i am planning to cross at least one of those nine ballparks off my list yet this year. stay tuned!
Posted by gcrl at 7:55 PM