blue in name only

in one of the stranger baseball developments in 2020 (and that's saying something), dodger stadium hosted the american league division series between the astros and the a's. i thought it strange since the dodgers were moving on to the nlds in arlington instead of staying home and having the astros and a's play in an american league park. as it turns out, it was probably a good thing as the dodgers were able to become more familiar with the rangers' new ballpark in advance of playing the world series there as well.
anyway, i didn't watch any of the alds, but i did catch some highlights on mlb network, and i had to do a double take. in what i assume was an effort to make the stadium a more neutral site, the outfield fences at chavez ravine had been wrapped in dark coverings. this move didn't make much sense to me, but i still sought out a card for my dodger stadium collection.
a few months ago i was able to pick up this 2020 topps now blue parallel card (numbered to 49) of josh reddick making a catch in the right field corner near the visitor's bullpen, although the astros used it for the entire series, even when they were the "home" team as was the case in this game. 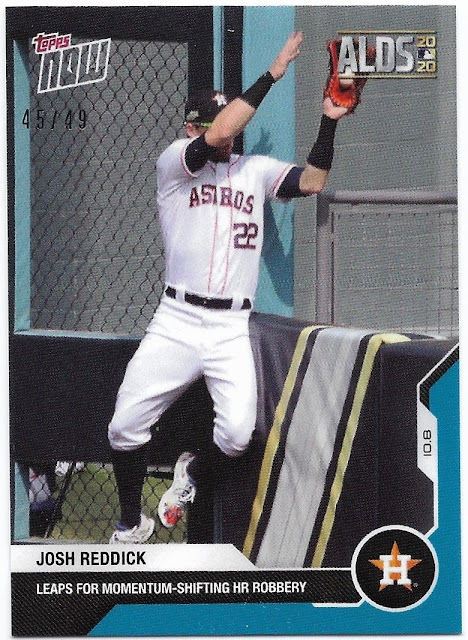 the a's had a 3-0 lead in game four of the series when reddick robbed matt olson of a home run with this catch. in the bottom of the inning, the astros scored five times to take the lead for good in what turned out to be the last game of the series.
the card shows a portion of the wrap that was applied to the fence and bullpen gate. it wrapped all the way from foul pole to foul pole, and was also applied to the padded railings in front of the dugouts. what a weird chapter in the history of dodger stadium, and i'm happy to have a card to represent it!
Posted by gcrl at 7:55 PM