my favorite cards of the year - 2005 edition

i recently introduced my mini collection focusing on my favorite cards from each year that i've been a collector. the basic gist is that i wanted to create a space for the cards that i most appreciated having in my collection in the year that they were released. these were cards that i acquired in the year that they were issued, and that i considered to be my favorites at the time. i have disallowed (most) cards that are already in other mini collections in order to avoid having a mini collection consisting of more steve garvey, double plays, and dodger stadium cards.
2005 was a crazy year for my collection. there was just so much product, and the explosion of parallels in many releases was really too much to handle. i was working in downtown minneapolis, and would walk over to the card and comic shop on hennepin during lunch hour fairly frequently to check things out. i usually left with a pack or two of the latest release, or a card from one of their display cases. with so much new product to choose from, there was always something different that caught my eye. anyway, here are my favorite cards that i obtained in 2005.
favorite non-dodger card: upper deck classics lyman bostock 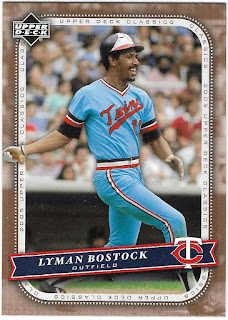 i was really looking forward to seeing how upper deck was going to follow their (in my opinion) fantastic legends timeless teams release in 2004, and the classics set was as close as it came. i was a big fan of the new sets featuring retired players, beginning with 1999's century legends, and so this set was a winner for me. the fact that bostock was included was just tremendous. i was a young fan just finishing up my first year of following a full baseball season when bostock was murdered, and i didn't quite understand it. i had followed the angels as well as the dodgers in 1978, and bostock had been a big deal for the halos. expectations were high given that bostock was coming off of a couple of seasons wherein he had finished in the top 4 in the american league batting race, and he was in the papers for acknowledging that he hadn't lived up to those expectations early on in his new contract.
bostock had hit well over .300 over the final four months of the season to get his average up to around .300 and silence the doubters of his talent. the angels were still in contention for the al west title when bostock was murdered, and with their performance the following year, everyone was left wondering what might have been had bostock survived. a terribly sad story, but having a new card of his to add to my collection in 2005 was a joy.
favorite dodger card: topps all-time fan favorites pedro guerrero 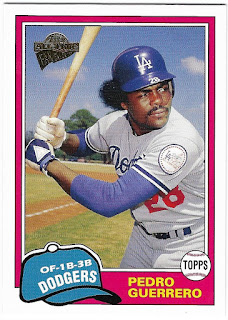 topps archives, introduced in 2001 (aside from the 1953 and 1954 reprint sets of the 90's and the 1995 brooklyn dodgers focused set), was another instant favorite of mine. and, when topps went to retired players with new photos in a variety of card designs in 2003 and rebranded it as all-time fan favorites, i was even more enamored. my favorite card of the 2005 release was this pedro guerrero card using the 1981 design. while guerrero received a card from topps in 1981 (after being absent from the 1980 set), this one is brighter and would have fit right in. it uses a photo from 1980 spring training which gives a nice view of the dodgers' all-star game patch. the card remained such a favorite of mine that three years later, i made sure to include it in the header of my first blog.
next up, 1986. stay tuned!
Posted by gcrl at 7:55 PM