it's been seven years and zero days

seven years ago tonight, my son and i were at target field to see the twins play the padres. justin morneau had been traded just about a week earlier to the pirates, and kennys vargas was up with the big club to audition as his replacement. he was hitting over .350 after his first three games, and this game would be his first in front of the home crowd.
vargas was 0 for 2 when he came to the plate in the sixth inning with two men on, two outs, and the twins trailing 1-0. he promptly deposited a jesse hahn pitch over the right field wall for his first big league home run, and received a standing ovation from the twins fans as a result.
over a year later, topps included that feat in its 2015 topps update first home run insert set. you know i wanted to add all of these cards to my collection, and here are the gold, silver and base versions of the card: 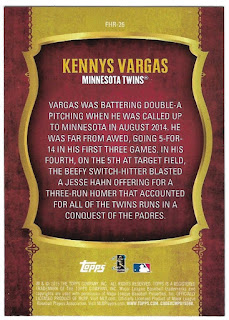 twins fans had high hopes for vargas, not just as morneau's replacement, but also as perhaps a partial redemption for giving away david ortiz. things didn't quite work out, and vargas hasn't been seen in the majors since the 2017 season. since then, he's been playing in the minors and foreign leagues, and is currently tearing it up in the mexican league.
by the way, there's a manufactured medallion version of the card, too, and i am on the lookout for one to add to my "games i attended featured on cardboard" mini-collection so let me know if you have one to trade.
of course, no kennys vargas post would be complete without a mention of brian from highly subjective and completely arbitrary. i emailed him last month prior to heading to the monthly card show for the first time since the middle of 2019. he wasn't able to make it, but he did say he had been out to see the twins a couple of times this season. no word on whether or not he's found any of his kennys vargas white whales yet.
Posted by gcrl at 7:55 PM