my favorite cards of the year - 2016 edition

i recently introduced my mini collection focusing on my favorite cards from each year that i've been a collector. the basic gist is that i wanted to create a space for the cards that i most appreciated having in my collection in the year that they were released. these were cards that i acquired in the year that they were issued, and that i considered to be my favorites at the time. i have disallowed (most) cards that are already in other mini collections in order to avoid having a mini collection consisting of more steve garvey, double plays, and dodger stadium cards.
as a fan of the game as well as a collector, it's always fun to have cards show up that are more than just a checklist filler. cards that go beyond a posed photo or headshot and deliver something unexpected. i was very pleased in that regard in 2016.
favorite non-dodger card: topps jose bautista (rainbow foil) 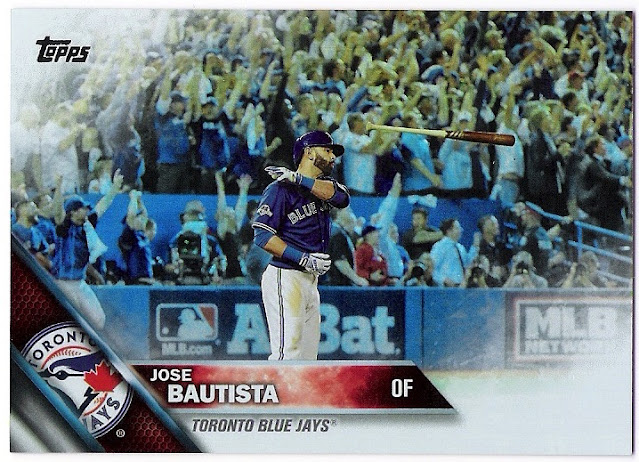 i've written before about my early thought (hope, really) that the photo used on gary carter's 1980 topps card came from the 1979 all-star game. it was within a few seconds of finding the card in a pack that i realized it was not from that seminal game of my childhood, but rather from a spring training matchup. still, it was a game action shot of which there were very few at that time. it seems to have taken a long time for topps to use action photos that can be tied to certain plays on the base cards (non-highlights or postseason cards) of players, and so i was surprised and pleased to see jose bautista's bat flip from the 2015 alds make the grade for his 2016 topps base card. bautista's home run capped the blue jays' comeback from a two games to none deficit in the series against the royals as it just about guaranteed their game 5 victory and advancment to the alcs, and his bat flip was the exclamation point. it was a fantastic baseball moment that caused some controversy, but i believe the reaction was unplanned and done without malice or disrespect to the pitcher, sam dyson.
favorite dodger card: panini diamond kings walter o'malley 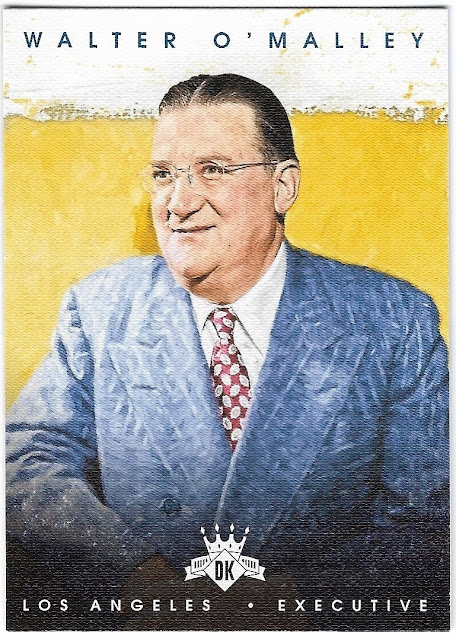 speaking about being surprised, i had to do a double take when i saw that o'malley was on the checklist for diamond kings in 2016. upper deck had previously given us cards of former dodger general manager al campanis and executive branch rickey, but we hadn't seen one of the guy who moved the dodgers to los angeles. i tried my hand at creating a couple of cards for my collection of o'malley, but having a honest-to-goodness card of him tops that, hands down. and it only took six years after i asked the question, where are the walter o'malley cards?
up next, 1982. stay tuned!
Posted by gcrl at 7:55 PM