on the field when it happened

i was reading a piece on jaime jarrin towards the end of the 2020 season, and there was an infographic that listed all the different on-field accomplishments he had witnessed and called during his career (which isn't over yet).  the same was done when vin scully retired, and it got me thinking. what player has borne witness to the greatest number of significant baseball moments on the field? i'm not talking about the player achieving the accomplishment, but rather another player participating in the game.
now, one of the most, if not the most, significant baseball events was jackie robinson's debut on april 15, 1947. a couple of those dodger players (pee wee reese and carl furillo) were also in the lineup for 'the shot heard around the world' in 1951 and don larsen's perfect game in 1956. those are three pretty big events in baseball history, for sure. yogi berra caught larsen's perfecto and then was on deck five years later when roger maris hit home run number 61 to break babe ruth's single season mark. carl yastrzemski was on the field for that home run as well, and he would go on to witness some other big baseball moments, too.
i, however, would like to submit that steve garvey may have actively witnessed more statistically significant baseball moments as a player than any other player. first, garvey was playing first base in atlanta on april 8, 1974 when hank aaron hit home run number 715 to break babe ruth's all-time home run record. dusty baker was on deck when the hammer went deep, by the way. i enjoy finding new cards from this event, and the latest one to join my collection is this one: 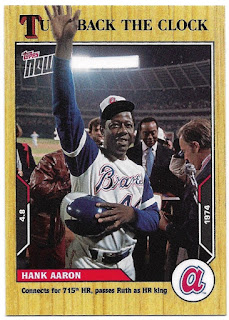 that's a 2021 topps now turn back the clock card that was issued a couple of months ago to mark the anniversary of aaron topping the babe. there is a very strong chance that the dodger in the background to the left of aaron's right arm is garvey himself 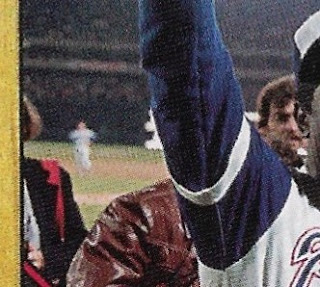 but it's too hard to tell for sure. the video footage from the game that i have seen doesn't provide a view that would confirm the dodger's identity, and so, as a result, this card goes in my lurker collection with the lurker being "unknown dodger".
seven years after aaron's historic home run, garvey was in the on deck circle on september 26, 1981 when nolan ryan retired none other than dusty baker to complete his fifth career no-hitter, breaking sandy koufax's all-time record. 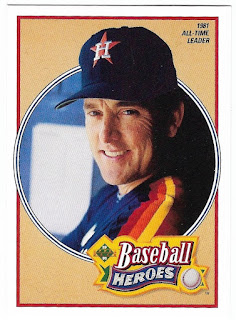 that 1991 upper deck nolan ryan baseball heroes card above addresses his record breaking fifth no-hitter on the back.
so garvey and baker were both active witnesses (along with davey lopes) to those two historic events. however, garvey was also on the field at riverfront stadium on september 11, 1985 when pete rose collected career hit number 4,192, which at the time was thought to be one greater than ty cobb's all-time record. 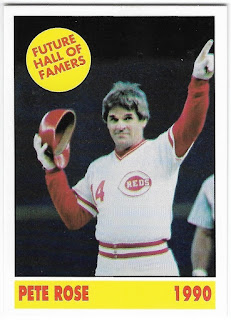 that is a broder card from something called 1991 the shanks collection. it shows garvey (more accurately, it shows his right arm) lurking behind rose who is standing at first base after collecting his record breaking hit, and it sits happily in my steve garvey collection.
that means steve garvey was on the field for three all-time record breaking moments (two of which were the most hallowed in the game), plus three other no-hitters (although nowhere near bert campaneris who was on the field for 11 no-nos). this doesn't even mention reggie jackson's three-homer game in the 1977 world series or the myriad other all-star, playoff and world series games garvey was involved in. speaking of reggie's game 6 performance, here's a card i added to my lurker collection recently: 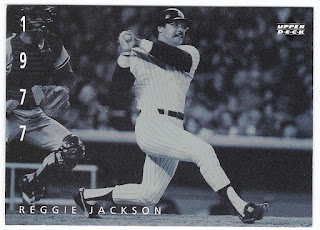 it's from 1994 upper deck american epic, and features steve yeager behind the plate as reggie hits home run number 1 or 2. i know it's not home run number 3, because yeager dropped to a knee when that one was launched.
i did some research and found that in addition to nolan ryan himself, his astro teammates terry puhl, jose cruz, phil garner, tony scott, and denny walling appeared in both ryan's fifth no-hitter and the game in which he surpassed walter johnson's all-time strikeout record with k number 3,509 in 1983. ryan was passed by steve carlton later that season before retaking the title for good, something that is also noted on the back of that baseball heroes card shown above.
terry mulholland is another guy who witnessed some baseball history as a player. he pitched in the game in which mark mcgwire broke roger maris' single season home run record with home run number 62 in 1998 (the aftermath of which was presented on this 1999 upper deck century legends memorable shots card). 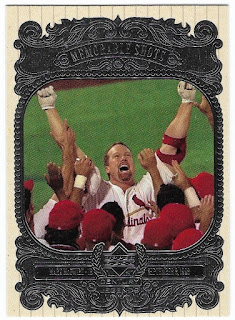 mullholland was also in the dodger bullpen when barry bonds broke mcgwire's record with his 71st home run of the season in 2001. several dodger players were there for bonds' 71st dong and shawn green's 4 home run/19 total bases game in milwaukee in may of 2002 which set a major league baseball record as well, although i believe mulholland was on the disabled list when that game took place.
ryan klesko played in the games in which rickey henderson broke ty cobb's all-time runs scored record of 2,245 and babe ruth's walk record of 2,062, and he also played in the game in which bonds broke hank aaron's career home run record of 755 (a moment celebrated on this 2007 topps update & highlights card). 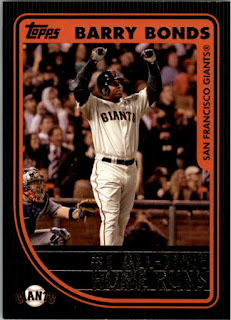 that's being a witness to history for sure. however, rickey didn't hold the walks record for long, as bonds passed him after just three years at the top, and klesko wasn't there for that one.
and, not only was ray durham playing in the game in which bonds hit home run number 756, he was also in the lineup the night bonds drew walk number 2,191 for his career to break rickey's short-lived record.  however, the player who might give the garv a run for his money as an active witness to history is jt snow. he played in the games in which bonds hit his 71st homer of the season, and drew walk 2,191, and he was also in the lineup for the angels in september of 1995 the night that cal ripken jr. played in his 2,131st consecutive game and broke lou gehrig's record. that game was immortalized on a number of cards in 1996, including card number 1 in the '96 upper deck set: 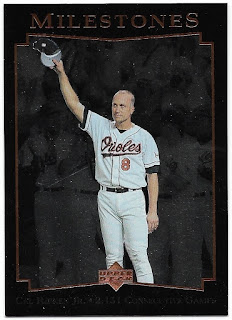 it was the defining event of the 1995 season for many fans, and an important post-strike moment as well.
so, as of now, garvey and snow both saw three all-time records fall - and the records that snow witnessed have yet to be re-broken, even if there is an asterisk associated with at least one of them. what do you think - any other players that i'm missing that have been on the field when it happened?
Posted by gcrl at 7:55 PM