from my dad's collection to mine

a long time ago, i gave my dad a 1966 topps jim lefebvre card for father's day. i was a relatively new collector, and i found the card in my local card and comic shop's box of 1966 cards. i had asked my dad who his favorite player had been, and he said lefebvre. knowing that the dodger infielder won the 1965 rookie of the year award, i figured i would look for a 1966 card. anyway, that gesture, combined with my passion for collecting, encouraged my dad to begin a collection of his own and started us on a path of opening packs and boxes together each spring, and heading to a few card shows (including a national convention) over the subsequent years.
a couple of years ago, he formally gifted me his collection. i am not ashamed to say that i broke it up and used some of the cards to further my 1965 topps set build and a couple of mini collections, and i sold and traded some of the cards as well. there are some cards, however, that i used to create a new mini collection - cards from my dad - that features three of the pitchers that he collected:
1. sandy koufax 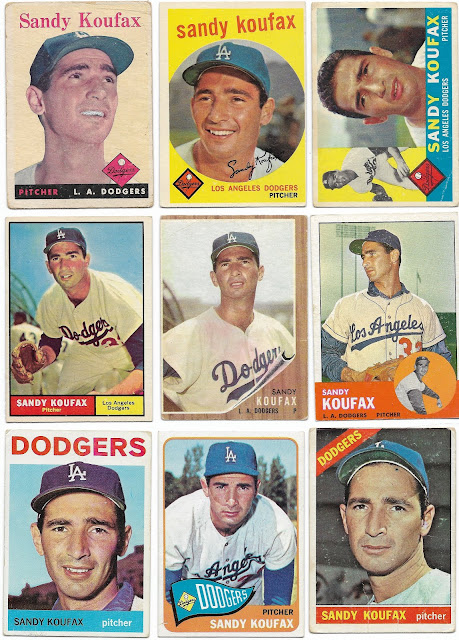 those nine cards, spanning from 1958 through 1966 fit nicely on a single page. my dad pretty much drew the line at the 1957 topps set (he only had one or two cards from years prior), so i am pretty sure he never owned a 1955 koufax rookie or his 1956 second year card. he did have a 1957 card of koufax, but he gave that to me several years ago when i was still working on my 1957 topps dodger team set. i have since upgraded it for the team set with this one 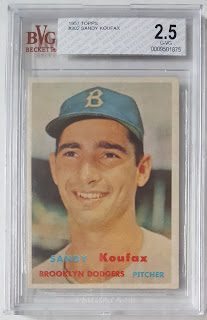 and moved my dad's old koufax card in to my '57 complete set build.
the 1958 card looks like it had been on display in a card shop window before my dad rescued it for his collection. he helped me understand that condition doesn't need to be king if all you are doing is trying to have fun with a hobby.
2. don drysdale

that is a complete career run of big d's topps flagship solo cards, including the 1957 rookie. i heard lots of references growing up to koufax and drysdale from my dad. he saw each of them pitch in person, and to be honest i am not sure which of them he favored.
3. nolan ryan 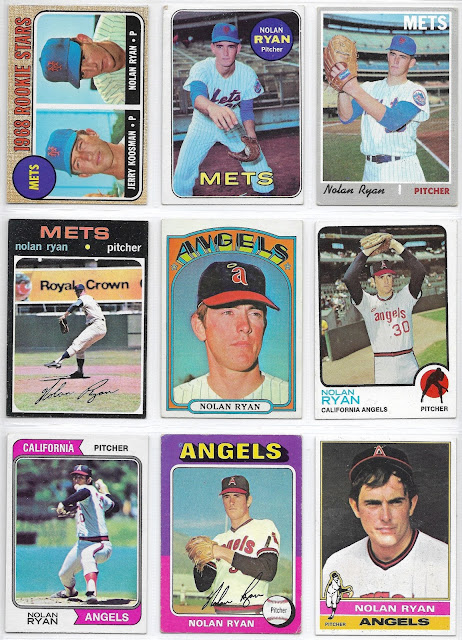 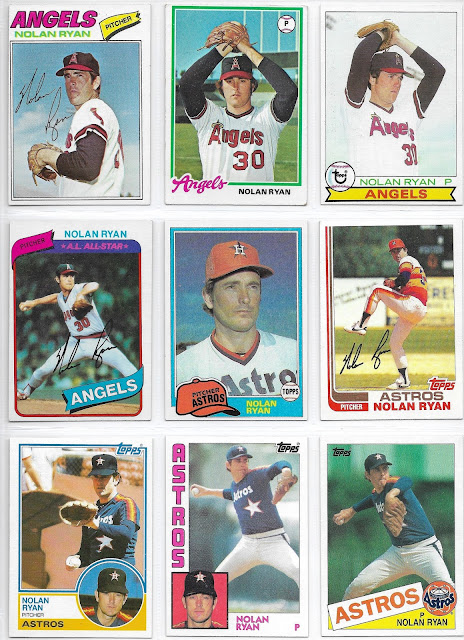 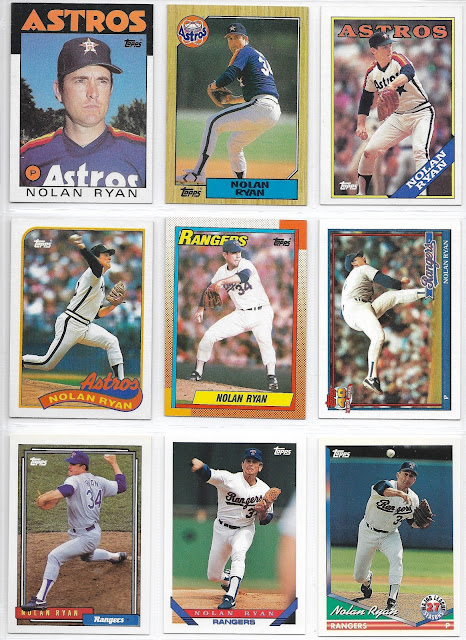 my dad saw ryan pitch in person as a met once, which i am jealous of. i had the chance to see him pitch against the angels in the late 1980s and early 1990s, but never took advantage. what's worse is that ryan was dominant in his two starts at the big a in 1989 that took place while i was doing something probably much less exciting about 20 miles away.  anyway, i really am fond of this collection. i have no idea what my dad paid for his 1968 ryan rookie, but i do remember looking at it with a sense of awe when he added it to his collection back in the early 80's.  the last box of cards i recall opening together was 1990 topps, and that was pretty much the end of his collecting days. so, after he handed these cards over, i mined my own defunct player collection of ryan and added the 1991, 1992, 1993, and 1994 cards. i find it very serendipitous that the result is 27 cards that fit squarely in three pages, and i think it is fitting that the collection is a combination of our efforts.
i am really happy to have these cards and plan to keep them together like this in my collection. i also have a 1966 topps jim lefebvre card in my 'meaningful and just because' mini collection. just look what it spawned!
i haven't seen my dad in person for 20 months, but we have plans to meet up in july. i am definitely looking forward to it! happy father's day tomorrow to all for whom it holds meaning!
Posted by gcrl at 7:55 PM