i decided towards the end of last year to take a look at my few remaining player collections and see if i could make some meaningful additions to them. these collections are primarily guys from the starting lineup of the team of my youth - the 1977 dodgers - and consist of cards that feature them after they left the dodger organization.  that means there are not many cards available for some, but quite a few for others. here are just a few of the cards that i added, primarily through a late december order from burbank sports cards.
now that i said that, of course, this first card was actually an ebay purchase around thanksgiving, and was the first card i picked up after setting out on this quest. it's a 2004 topps originals 1986 topps traded steve yeager signed buyback 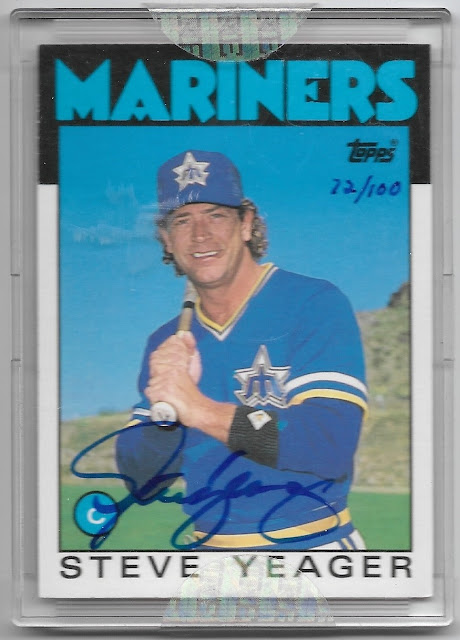 there's a pretty healthy scuff on the plastic holder, but i plan to leave it encased. i'll look for cards from this set time-to-time, as there is a favorable dodger player checklist, but it's been awhile since i've added one to my collection.
this next steve yeager card also came from ebay. it's a 2007 grandstand inland empire 66ers card 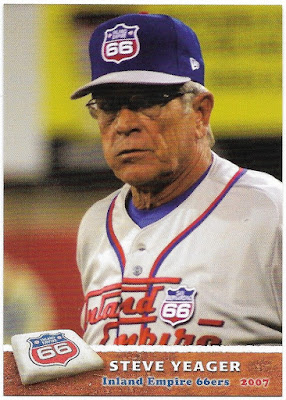 yeager was the hitting coach that season for the 66ers, the dodgers' high-a affiliate. his star pupil was carlos santana, who was later dealt to the indians the following year for casey blake. for guys like yeager and bill russell, i consider these minor league cards to be non-dodger cards and keep them in my player collections since i have no desire to complete these team sets.
ok. now the remainder of the cards i'll show come from burbank.  i added quite a number of non-dodger don sutton cards, but i'll only show a couple of the late hall-of-famer.  this first one is a 1983 donruss variation 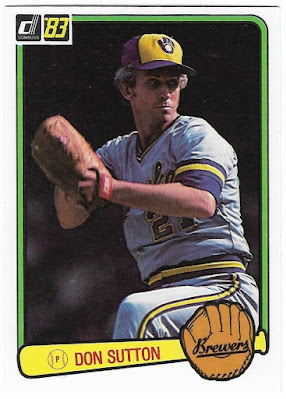 the 'regular' version of sutton's 1983 donruss card has a blue border around the photo, and this version has the green border. all of the other brewer cards in '83 donruss have green borders, so i am not sure why this one is considered to be the variant.
this is a 2005 upper deck hall of famers cooperstown calling card, numbered out of 50 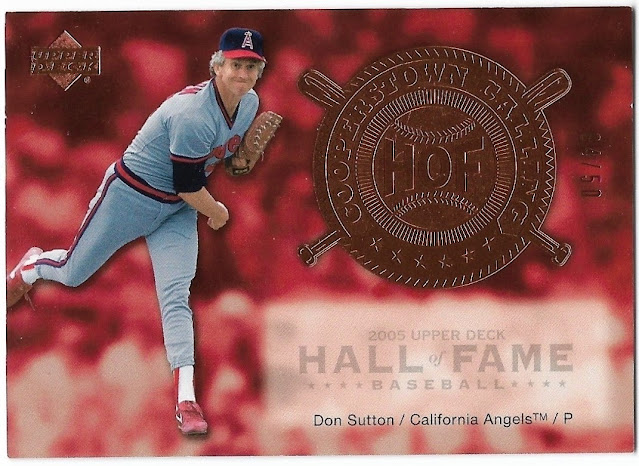 i was a sucker for any cooperstown calling/call to the hall type inserts that popped up in the '90s and '00s since a lot of the players featured in those sets were ones that i grew up following. sutton was no exception. his call to the hall came in 1998, so i don't think they were still calling in 2005.
thanks to playing for four different teams and several years after leaving the dodgers and eventually making it to the hall of fame, sutton has the most post-dodger cards of anyone in my player collections outside of steve garvey.  dusty baker is third, i am fairly certain.  i added this 1992 mother's giants coaches card 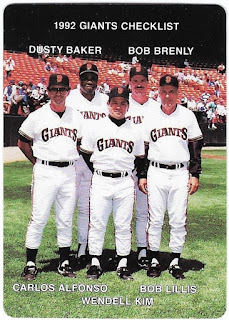 as well as a few managerial cards of johnnie b., including these gold parallels 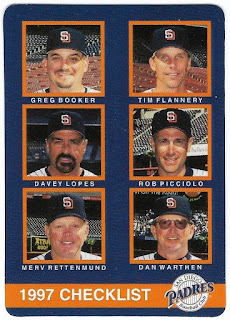 as well as a card from his lone managerial gig. this one is from 2001 topps chrome, and it is the 'retrofracter' parallel 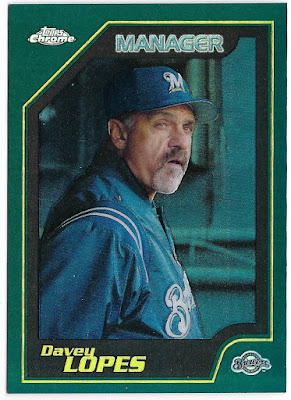 the best part about the card is the back 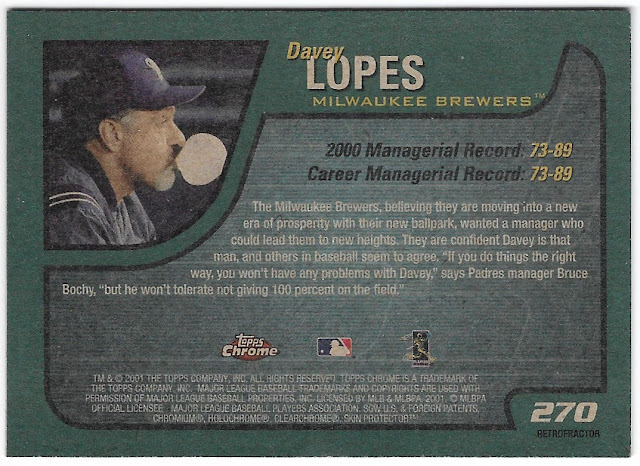 it's not the first time lopes was featured on a card blowing a bubble.
finally, here's a ron cey from 2017 topps archives signature series 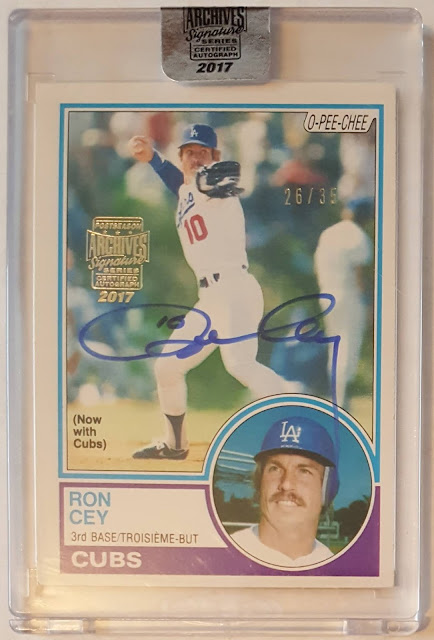 it's cey's 1983 o-pee-chee card which is a nice team and text variation (although not as colorful as his 1987 variation), and is worthy of a hearty "oh my, o-pee-chee!". since cey is listed as a cub, i consider this to be a post-dodger career card of his, and so it goes in this mini-collection.
i'll continue to keep an eye out for post-dodger cards of these guys, along with reggie smith, rick monday, bill russell, and tommy lasorda but there are not too many new ones to be found.
bonus content! i recently added a card from ebay that showed up in time to make it in to this post 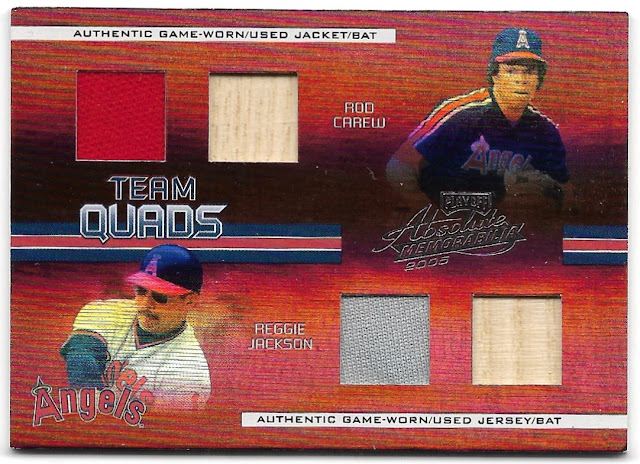 that's a 2005 playoff absolute memorabilia team quads double swatch spectrum card. yes, rod carew and reggie jackson are not former dodgers, but the two guys on the back are 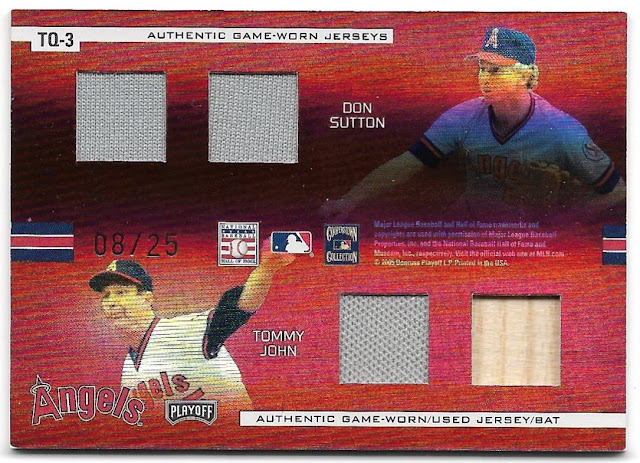 of course, this goes in the don sutton post-dodger collection, but it's nice to see tommy john, too. sutton and john were never teammates on the angels - they missed each other by a couple of months in 1985 - but each of them did pitch with carew and jackson behind them in anaheim.
double bonus content! mr. haverkamp recently sent me another dusty baker gold parallel for the collection: 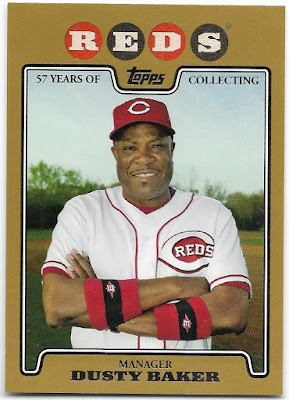