my favorite cards of the year - 1982 edition

i recently introduced my mini collection focusing on my favorite cards from each year that i've been a collector. the basic gist is that i wanted to create a space for the cards that i most appreciated having in my collection in the year that they were released. these were cards that i acquired in the year that they were issued, and that i considered to be my favorites at the time. i have disallowed (most) cards that are already in other mini collections in order to avoid having a mini collection consisting of more steve garvey, double plays, and dodger stadium cards.
1982 was a fun year for me. the dodgers were the reigning world series champions and my dad was collecting cards alongside me. in addition to hoping for a dodger repeat in the world series, i was in on billy-ball and the oakland a's, and my favorite cards from that year reflect this sentiment.
favorite non-dodger card: donruss billy martin 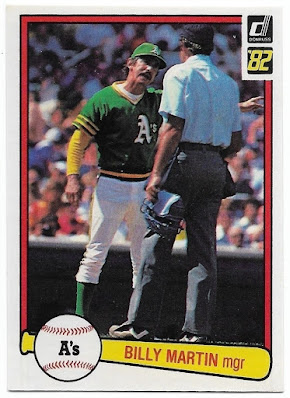 it was either this card or the topps rickey henderson card that were my favorite non-dodger cards that year, and i gave billy the nod due to the umpire interaction. i hoped then that tom lasorda would get a similar card, and i like to think that his 1983 topps card features a similar scene to the martin card above. truly, i enjoyed watching martin argue with the umpires. i think it is a bit ridiculous that managers today can't argue balls and strikes as i've watched a lot of games this season, and the strike zone is definitely wider than the plate. where is the accountability? at least billy was able to yell at them and kick some dirt and maybe give the umps something to ponder.
favorite dodger card: kmart don drysdale 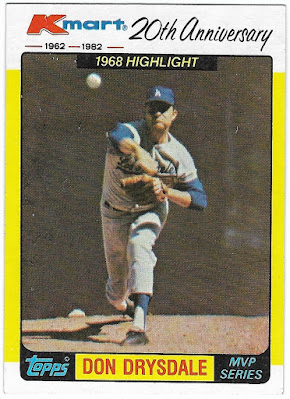 like many if not most collectors, my first experience with a retail box set was the 1982 kmart set. my grandma used to take my brother and i to kmart once in a while, and i was surprised during one visit to find a box of cards at the checkout stand. to help celebrate the 20th anniversary of the first kmart opening, topps produced a set featuring cards of the league mvp winners from 1962 through 1981, and also added three highlight cards. the highlight cards featured pete rose, hank aaron, and don drysdale. i thought the inclusion of highlights in the set was strange, and the inclusion of drysdale even stranger. rose was already in the set thanks to his 1973 mvp status, and aaron was an mvp (although his award came in 1957 and so was not represented in the set). drysdale, however, was not a league mvp. because of how out of place this card seemed, i treasured it even more.
up next, 2011. stay tuned!
Posted by gcrl at 7:55 PM