i accept the fact that i am now, first and foremost, a player collector. i still collect dodgers, but have no illusions of collecting them all. i have a number of mini-collections as well, but i've pretty much quit (new) set collecting, and my main focus continues to be steve garvey cards. in recent years, however, there have been so many parallels that i have come to terms with an approach that nets me just one example of each higher end card rather than one of each parallel. of course, there are exceptions.
one example of the rule can be seen through my accumulation of garvey cards from 2020 panini flawless. with releases like this, i have found the best approach is to pounce on reasonable buy-it-now listings otherwise i run the risk of paying more later. there is usually a short window when a product is "hot" and the majority of the cards reach the secondary market. after that, it is hit or miss when searching for them.
garvey had four cards in 2020 flawless, and each card had at least three versions. there are a total of 18 cards available for the garv from this set, which is not too bad compared to some others.  here is one of the cards that has six versions: 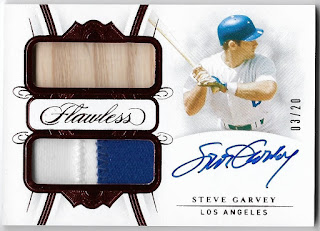 that's the dual patch autograph card in ruby form. of course, i don't think it is a dual patch as one of the "patches" is a bat piece. for this card, ruby (numbered to 20) is the second highest print run, with other versions available in /25, /15, /10, /5, and /1.
here is the other card with six varieties 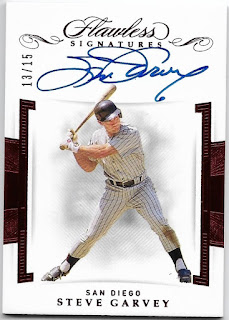 that's the signatures card, again in ruby form. again, ruby is the second highest print run, but for this card the "base" is numbered to 20 with the other versions being in /10, /5, /3, and /1.
this next one was the first card from this set that i acquired thanks to a very very reasonable buy-it-now 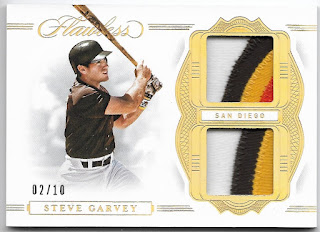 that is the dual patches card - gold version. it has the highest available print run, with the other two versions being /5 and /1. i think this is a beautiful card, and it's due to the padres colors.
garvey's fourth card in the set is this one: 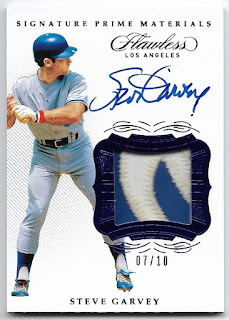 that's the signature prime materials, which comes in print runs of 10, 5, and 3. this was the one card of the four that i really had to wait on - i missed out on half of the print run before i was able to buy this card, and i got a middle of the pack price.
remember up top when i mentioned that there are exceptions to the rule? well, here's one. 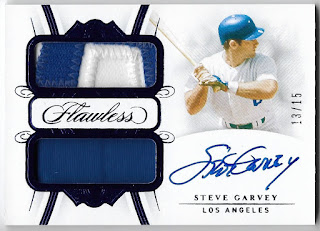 yes, that is the sapphire version of the dual patch autograph. i added it because of the "a" nameplate patch which appealed to me. it is still likely not a true dual patch because the second piece, i believe, is from garvey's jacket that panini has been cutting up over the last few years.
while i'm talking about panini flawless, here are a couple of garvey's cards from the 2017 release 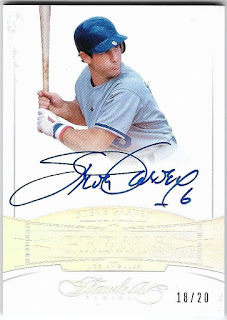 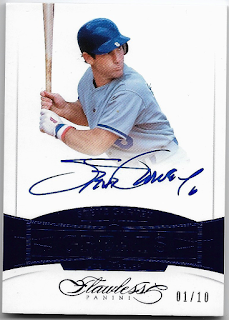 i already had the /20 in my garvey collection, but saw an opportunity to add one to my dodger collection at a great price, so i pounced. i also have a ruby (/15) version in my garvey collection, but added the sapphire (/10) because i couldn't pass it up at the buy-it-now that was offered. there are still three versions with smaller print runs of this card that i do not own.
lastly, here is a 2019 panini flawless signatures card i picked up about a year ago 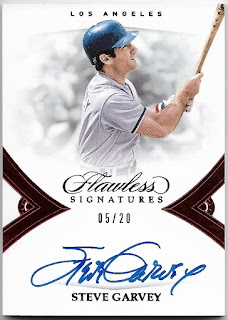 it's the ruby version, and pairs well with the sapphire version i already owned.
i have another parallel focused post in the works. the theme of that one is very fittingly "be careful what you wish for". stay tuned!
Posted by gcrl at 7:55 PM