my favorite cards of the year - 2011 edition

i recently introduced my mini collection focusing on my favorite cards from each year that i've been a collector. the basic gist is that i wanted to create a space for the cards that i most appreciated having in my collection in the year that they were released. these were cards that i acquired in the year that they were issued, and that i considered to be my favorites at the time. i have disallowed (most) cards that are already in other mini collections in order to avoid having a mini collection consisting of more steve garvey, double plays, and dodger stadium cards.
back in 2011, the twins were in their second season at target field which was pretty much right behind the building in which i worked. i could see the top and back of the minnie and paul sign from my office window, in fact. i was excited about the season, collecting cards, and blogging for the third year running.
favorite non-dodger card: topps minnesota twins (diamond anniversary parallel) 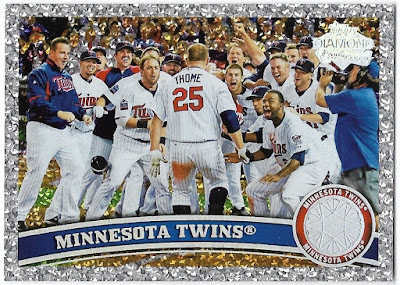 in the post about my favorite cards from 2016, i mentioned how great it is to be able to tie base cards back to a specific game or event. this card features a photo from the august 17, 2010 game at target field in which jim thome hit the first ever walk-off home run in the stadium's short history to beat the division rival white sox in 10 innings. it was a shot and target field exploded and it was awesome to watch - i wish i had been there in person. i made it to target field quite a number of times in that first season, and had a blast. it really is a great stadium. i also liked this card because topps delivered after failing to produce a similar card for nomar's walk-off home run in the dodgers 4+1 home run game against the padres in 2006 (i had an image from that game similar to this as my desktop wallpaper for a year or so). these days, these walk-off celebrations are fairly common on cards, but back then not so much.
favorite dodger card: topps marquee clayton kershaw 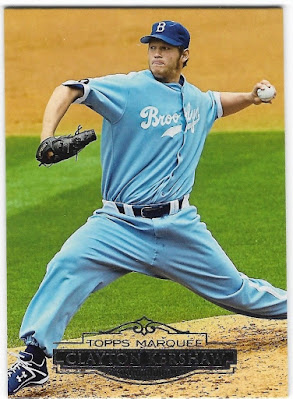 with apologies to dee gordon's 2011 topps update card.
i think i've only been to one throwback game during my baseball fandom. it was the dodgers against the brewers in 2002 (the night before the shawn green four homer game). the brewers wore milwaukee braves uniforms, but the dodgers just wore their regular road unis. not even a brooklyn cap! i was disappointed a bit, and so was exicted to see some games on tv in 2010 that had the dodgers wearing the relatively obscure baby blue brooklyn uniforms. these were a nod to the 1944 satin baby blues that the dodgers wore to give some flair to night games on the road.  here's an article about how the throwbacks came to be, as well as a sweet photo of the original uniforms in action. anyway, i was excited to see that topps put the throwbacks on a number of cards in 2011, including this kershaw card which features an extra baggy example.  it made me think that the dodgers might wear throwbacks in other seasons, including 2016 which was the 100th anniversary of their first world series appearance and would have been a great opportunity to show off those sweet checkered uniforms. alas, it was not to be.
up next, 1989. stay tuned!
Posted by gcrl at 7:55 PM