my favorite cards of the year - 2013 edition

i recently introduced my mini collection focusing on my favorite cards from each year that i've been a collector. the basic gist is that i wanted to create a space for the cards that i most appreciated having in my collection in the year that they were released. these were cards that i acquired in the year that they were issued, and that i considered to be my favorites at the time. i have disallowed (most) cards that are already in other mini collections in order to avoid having a mini collection consisting of more steve garvey, double plays, and dodger stadium cards.
i looked back at my first blog to see what i was writing about eight years ago, and there was a lot about retail purchases (i pulled some decent stuff that i sold and traded away as i recall) and trades with bloggers like play at the plate and royals and randoms, as well as still-current trade partners cards on cards and baseball cards come to life. i was posting more than once a day, and going through my memorials mini collection posts. that is appropriate, given one of my favorite cards from that year...
favorite non-dodger card: topps archives joe mauer 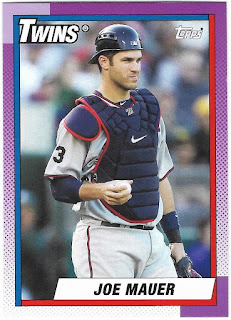 i was not a fan of 1990 topps when it came out, but i slowly began to appreciate it and its lichtenstein-esque design in the early 2000s. when topps went to it for one of the archives subsets in 2013 i think the brighter stock helped me appreciate the design even more. mauer's card caught my eye because of the harmon killebrew memorial patch, but it was the color scheme that kept me coming back. there were a few twins cards in 1990 that received the purple border treatment, but what ties this card together are the red inner border and the red outlines of mauer's chest protector.
favorite dodger card: panini cooperstown vin scully 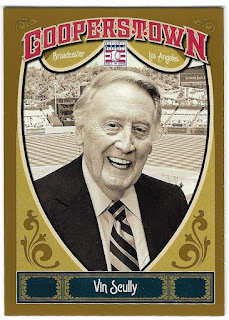 in 2013 i chased the rainbow for ted lilly's topps card, as well as nick punto's update card, but scully wins out. like those other two, the photo used features dodger stadium as a background so i am breaking one of my rules here, but after waiting for a solo scully card for my entire collecting existence, i (and like minded collectors) was rewarded by panini and i couldn't have been happier. i also added this card to my collection of cards featuring game 1 of the 1988 world series thanks to the line score and write-up on the back. that means this card is part of my dodger collection and three other mini-collections and i just might create more mini-collections just so i can hoard more copies of it.
up next - 2021. stay tuned!
Posted by gcrl at 7:55 PM