i had a field day on camera day 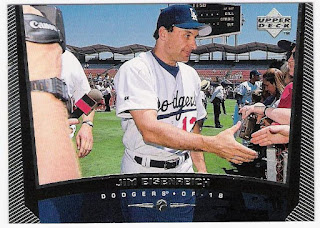 (when's the last time you saw a calculator watch on a baseball card?), and ismael valdes' 1997 card: 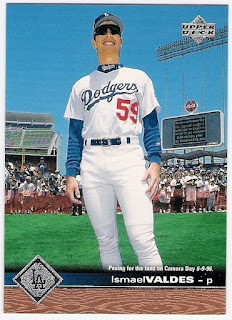 which features a lot of people on one piece of cardboard. there's a couple of mike piazza inserts in 1997 collector's choice that feature photos from the same day as valdes' card, and the back of gary sheffield's 1998 series 2 card uses an image from 1998's camera day festivities.
i have been to at least two or three camera days at dodger stadium, including the 1997 game against the expos. there are no obvious cards featuring photos from that year that i have seen, although i have always suspected that vladimir guerrero's 1998 card 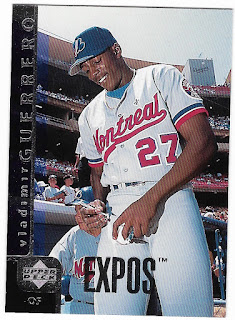 features a photo from that day. there's just no way to tell.
now, camera day is a bit misleading. it's not a giveaway like "dodger helmet weekend" or "batting glove day", but rather a day for fans to bring their cameras and get on the field to see players sort of up close.  the first one i recall attending was on july 30, 1978.
one of the things i remember most about that day was how big the numbers on the outfield wall were up close and in person. as you might recall, the distance measurements on the dodger stadium outfield wall were large, blocky numbers as seen on this 1990 upper deck tom foley card 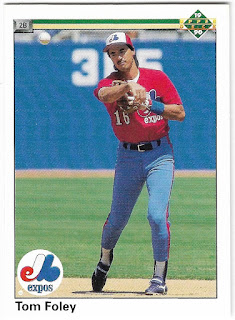 we were ushered on to the field and allowed to walk along the outfield grass and warning track as i recall. i walked past the spot where ron fairly caught the final out of game 3 of the 1963 world series, as immortalized on this 1964 topps card 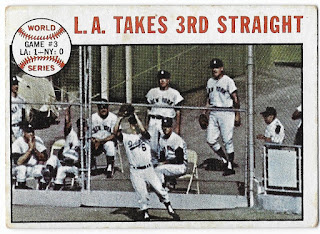 and stood under the 360 marker to the left of the visitor's bullpen, a spot seen on this 1975 dodgers postcard of don sutton 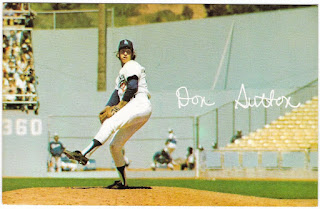 in fact, here's a photo 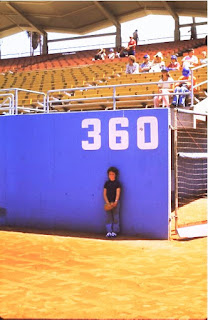 this obviously occurred prior to the addition of the windows in the wall that allowed the bullpen folks to hang out in shade and still see the goings on out on the field. the window is visible on this 1989 fleer chris sabo box bottom card 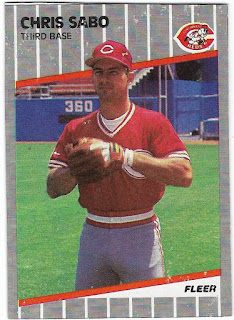 and it has been modified a few times since then.
we didn't really have any photos of players because it was pretty near impossible to get to the front. i was ok with that as it was cool to be on the field.  here's a polaroid photo that we took which gives you some idea of the mass of humanity that was there vying for space 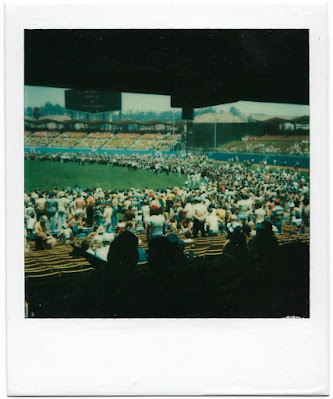 i think we took that photo as we approached our seats in the right field corner and prior to going on the field.
later on, after the field was cleared of fans, the pirates came out to warm up and i took a photo of jerry reuss 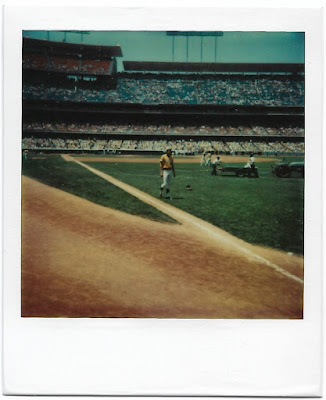 i assure you that is reuss. i later learned through an email with him that he would do his work in between starts on the right field side of the field, a practice he continued even when he was a dodger.
reuss eventually made his way closer to the stands, and my dad took a much better photo of him 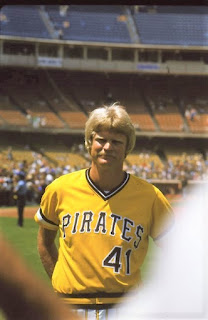 i later found it interesting that the player we got closest to on camera day wasn't a dodger...yet.
bonus info!:  i didn't make it down to the dodger stadium field again for many years. our high school team would have played there had we advanced further in the playoffs than we did, so i waited until an eric clapton/elton john concert in august of 1992 before i set foot on the field again. this time, i was able to walk around the infield and even collect a bit of dirt from where davey lopes and steve sax positioned themselves. i had even brought an empty film cannister with me 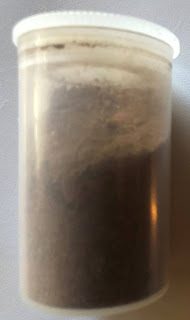 to collect some of the infield clay. i keep it next to a similar cannister that has a chip from the berlin wall that my brother had collected for me shortly after its fall in late 1989.
it's been almost 30 years since i was on the field at dodger stadium, but maybe someday i'll get back for the father's day catch. i have been down on the field of the metrodome and target field before a game, as well as the superdome in louisiana and most recently us bank stadium in minneapolis, but those are stories for another day.
Posted by gcrl at 7:55 PM