there was a wills, so i thought there might be a way

maury wills was one of the players eligible for the hall of fame on the golden era committee ballot, which was voted on yesterday. unfortunately, wills did not get the call from the hall.
i am a bigger hall kind of guy, so i was hoping wills would make it. that would also initiate the retirement of his jersey number by the dodgers, which i also support. wills was a big part of the franchise as it moved from brooklyn to los angeles, and his speed was an asset on those somewhat underperforming offensive teams of the early 1960's.
i am biased, of course, and wills is probably just a hall of very good player who stole a lot of bases and broke one of ty cobb's records in his most well known season. anyway, i figured i would show some autographs of wills that i've acquired recently - particularly after fuji noted how affordable his certified autos can be in response to one of my earlier posts.
2004 topps retired signature 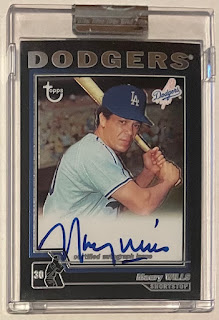 i've thought about adding wills to my hall of famer collection, but haven't pulled that trigger (yet). i guess i am not too unlike the dodgers in their retired number stance when it comes to guys like wills and gil hodges - another guy who was on sunday's ballot but, unlike wills, one who was elected to cooperstown. i assume the dodgers will now retire hodges' number 14, and i will certainly be adding him to my hall of famer collection (along with a couple others). stay tuned on that.
in other hall of fame news, it will be interesting to see who is elected by the writers for induction in 2022 with some big names entering their last year on the ballot and some big names being added to the ballot for the first time. i'm looking forward to the results!
Posted by gcrl at 7:55 PM