i helped to reverse the curse

back in 2004, i saw a game in fenway park for the first time. a few months later, the red sox won their first world series since 1918. coincidence? i am not so sure, although the bosox have won three more titles since then, and i haven't been back to fenway since '04.
i had visited boston several times before, but always in the offseason. so, when it was announced that the dodgers would visit fenway for the first time since the 1916 world series, i was all in to get my butt to beantown.  fenway was the 12th stadium i saw a major league baseball game in, and i have this 2002 fleer red sox checklist card 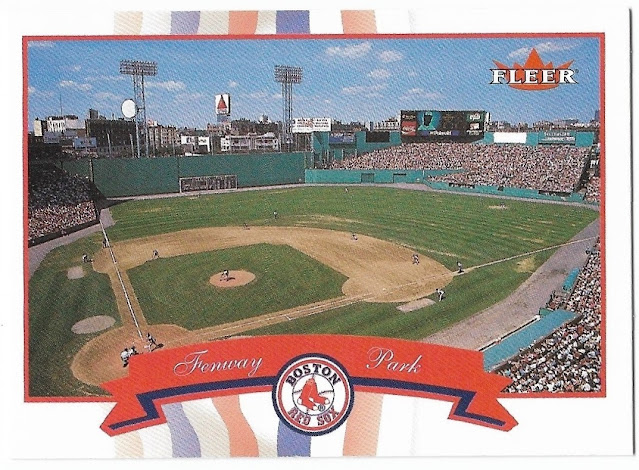 in my "stadiums i've seen a game in" mini-collection.
here are my ticket stubs from each game of the three game series: 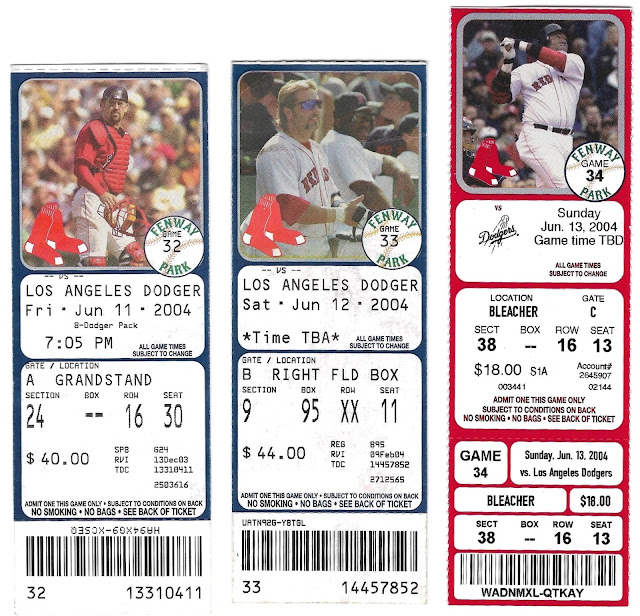 jason varitek, kevin millar, and david ortiz are featured, with ortiz fittingly on the game #34 ticket.
i purposefully bought the tickets so as to get a variety of vantage points throughout the weekend. friday night we were on the third base side, saturday i was on the first base side (i was solo for that game as my siblings opted out), and sunday we were out in the center field bleachers.
the first game was a pitchers' duel between odalis perez and derek lowe for six and a half innings before david ortiz hit a home run leading off the bottom of the 7th to start the scoring. the dodgers tied the game in dramatic fashion in the top of the 9th thanks to an error by manny ramirez who muffed a pop up that should have ended the game. no worries for the red sox faithful, however, as in a preview of postseason heroics, ortiz ended the game with a walk-off base hit in the bottom of the ninth. also previewing the postseason, dave roberts stole second in the game (although he was still a dodger at the time).
the second game featured jeff weaver against tim wakefield, with neither pitcher doing all that well. the dodgers beat the red sox 14-5, and even though it wasn't a save situation, eric gagne came in to pitch which i appreciated. i had hoped to see him on the mound at some point during the weekend, and he didn't disappoint as he struck out the side in the bottom of the ninth. at some point during the game i moved down to a seat along the railing on the right field line. it was an interesting view looking down the first base line from my seat, similar to the corner seats in dodger stadium, but it felt much closer to the action.
sunday's game was the espn sunday night game. pedro martinez was pitching which was exciting, and the dodgers countered with hideo nomo. nomo gave up four runs before exiting in the fourth inning, and although pedro gave up a run in the first, the dodgers couldn't do anything else against him and lost 4-1.
i kept score on friday and saturday, but not sunday, and i took pictures all three days. here are a few: 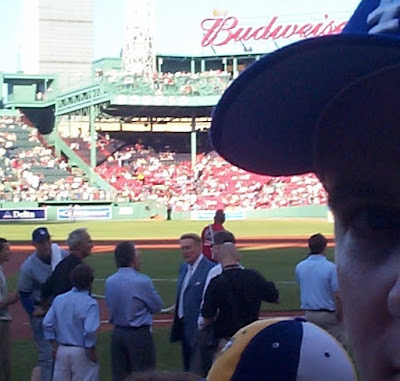 that one is from friday night. i've cropped the image, but it's me with vin scully and sandy koufax! sure, they are down on the field (talking to the mccourts) and i am in the stands, but still.
the red sox retired numbers, including jackie robinson's, are also in the photo on the upper facade in right field, but you can't make them out in the photo. i took a better photo of the numbers on saturday when i was sitting on the right field side: 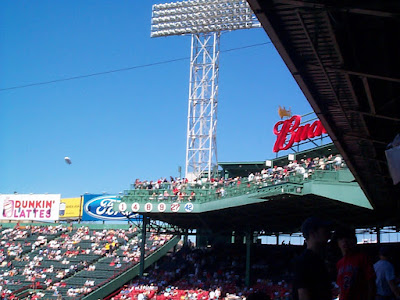 this is the first pitch of the series, from derek lowe to future red sox hero dave roberts: 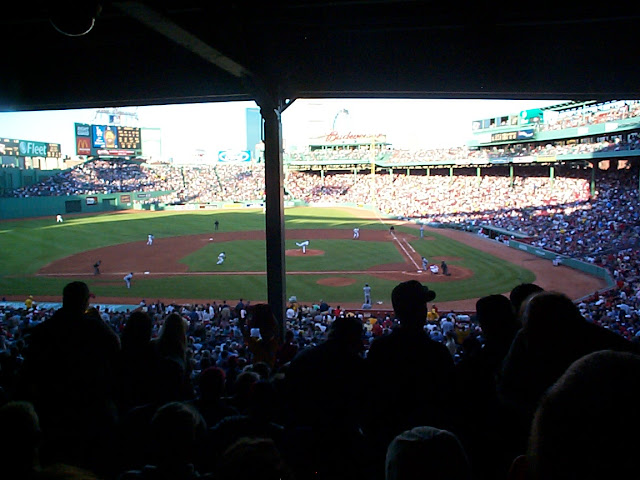 and this is the first pitch of the bottom of the first, from odalis perez to johnny damon: 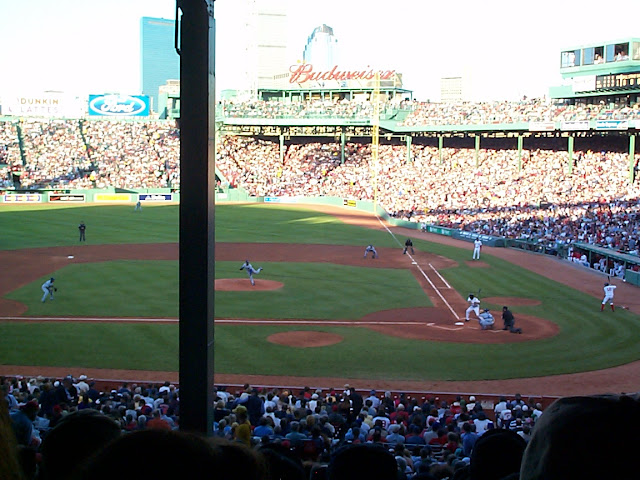 keep in mind that the capability of digital cameras back in 2004 was not anywhere near today's level. i think this camera was purchased in 2000, so it was even worse. here's one more photo from friday night: 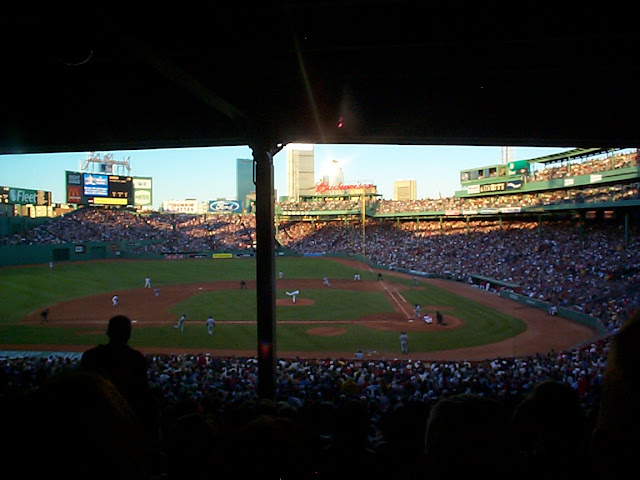 that's shawn green striking out on a 3-2 count with the bases loaded in the top of the 3rd. i was hoping to catch a big play...
saturday photos include first pitch from tim wakefield to cesar izturis: 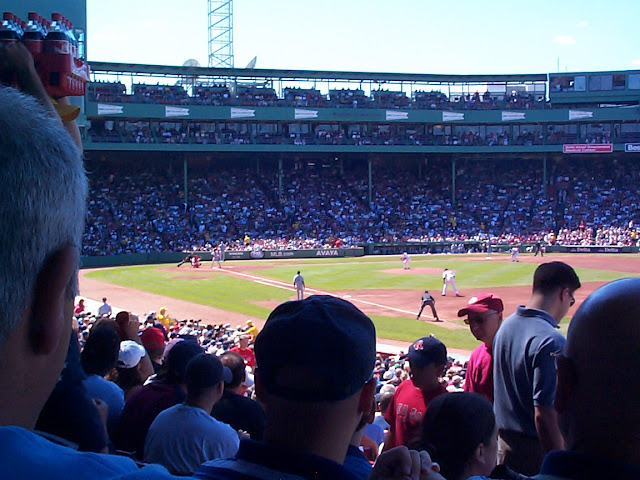 and eric gagne jogging in from the bullpen for the bottom of the ninth: 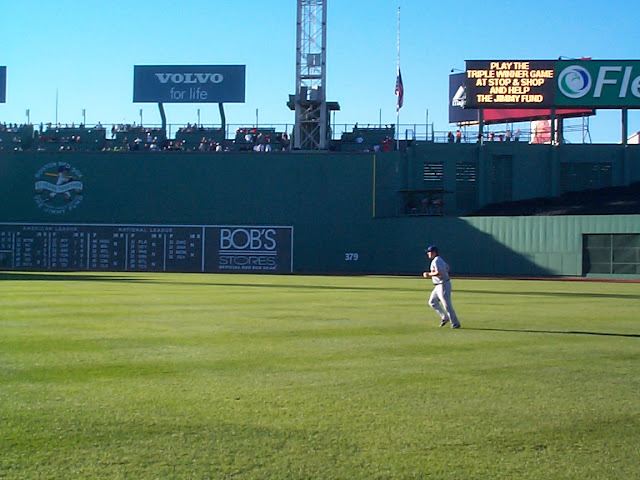 i'll finish with a couple from sunday night. here's pedro heading to the pen pre-game: 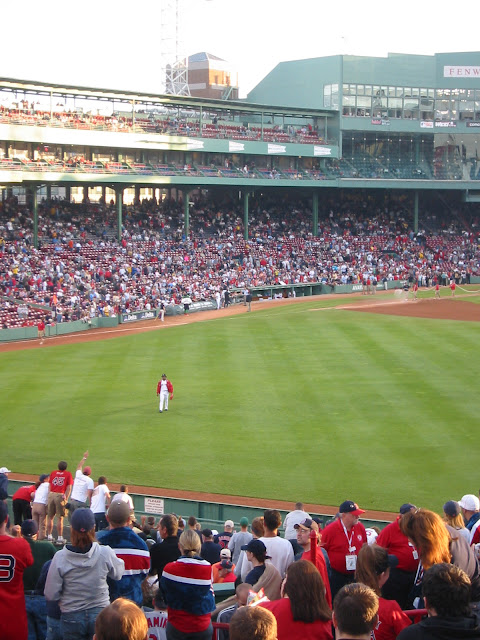 and here's his first pitch of the game to dave roberts: 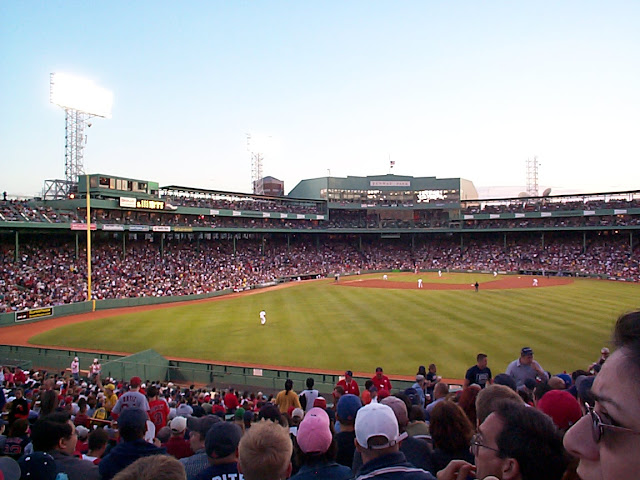 i wore different levels of dodger gear the whole weekend and the red sox fans were nothing but hospitable and friendly. it was a great weekend trip with my siblings, and a few months later, the red sox were world champions for the first time since 1918. coincidence?
Posted by gcrl at 7:55 PM