sometime around the year 2000, i began putting together "sampler" sets of topps sets from 1952 through 1969. i had no intention of ever completing any of those sets, and i figured it would be a fun idea to pick up a card from each team and each subset for those older sets.
i finished the task in a few years (it was a low priority), but then decided to scrap the collection as i began putting together the 1965 and 1957 sets.  now, i've decided to put together a "representative card" mini collection that will make it easier for me to see a great card from each topps flagship set from 1952 on.
i'll show off the cards occasionally, along with a reason for choosing that particular card. i won't use a card that is in my dodger collection, or any other collection for that matter, so i should wind up with a good variety.  here are the cards that represent the 1990's in this mini collection:
1990 - bob welch 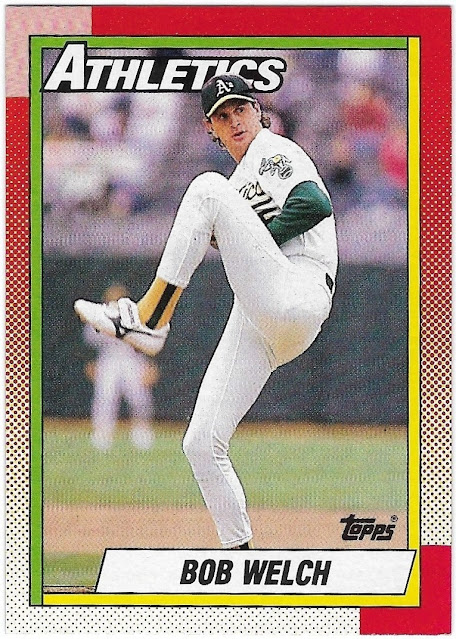 the 1990 set has grown on me over the last 30 years. when it was the current set, i couldn't stand it and i purchased very little of it - a box maybe. i eventually collected the full dodger team set and bought a complete set just to appease my inner collector. it has since grown on me, and this bob welch card is actually pretty nice.  1990 was a big year for old friend bob welch, who won 27 games for the american league champion a's while losing 6 - he only had 2 no decisions! he also took home the cy young award which perhaps offered him some consolation for being swept by the reds in the world series.
1991 - ken griffey jr 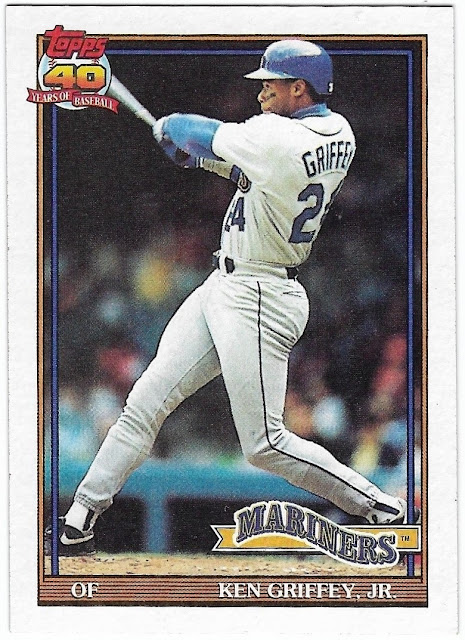 as much as i disliked the 1990 topps design, i loved 1991. ken griffey jr's card is a decent one to represent the set (i already have the carlton fisk card in my 'favorite cards of the year' mini-collection). jr was just 21 during the 1991 season, but he hit 22 homers, drove in 100 runs, and had a batting average of .327, all while making for must see tv on sportscenter.
1992 - barry bonds 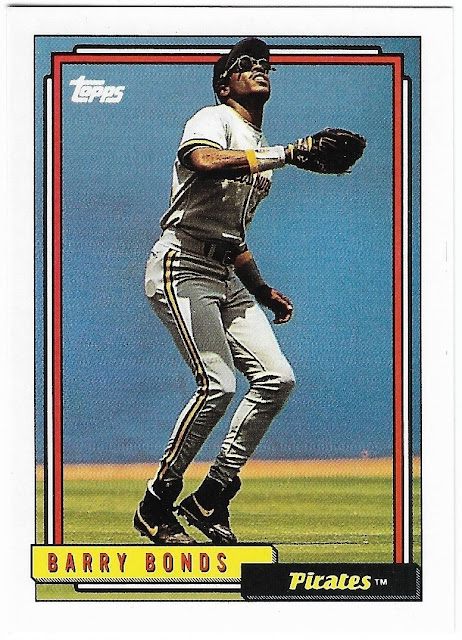 i didn't mind the 1992 topps design, and it had some great looking photos in the set. tommy lasorda's card was a standout for me, but with the initial release of the gold parallels, barry bonds' card was the one i was looking for. one of the local card shops had asked me if i had pulled that particular card, as they were on the lookout and promised a decent sum for it. i never did find one, but bonds' regular card is worthy of representing the set here. he won his second mvp award that year, which was his last in a pirate uniform.
1993 - tony gwynn 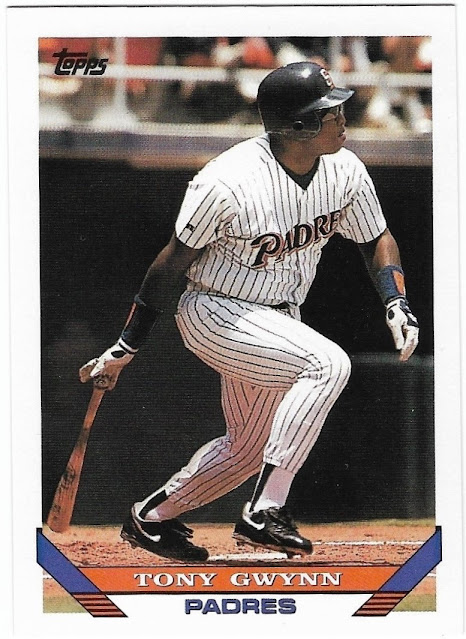 i was out of college by the time the 1993 season began, and working full-time in my chosen field which wasn't a guarantee back then. i didn't make it to many games that season, but it began to dawn on me that i could get to padres games almost as easily as i could get to dodger games. i began testing that theory in 1994. meanwhile, gwynn was doing gwynn things - hitting over .300 for the 11th year in a row - and he posted the third highest batting average of his career up to that point. unfortunately for him, his .358 mark wasn't enough to win his fifth batting crown - baseball had come to colorado, and andres galarraga hit .370  (.402 at mile high stadium) on the season.
1994 - frank thomas 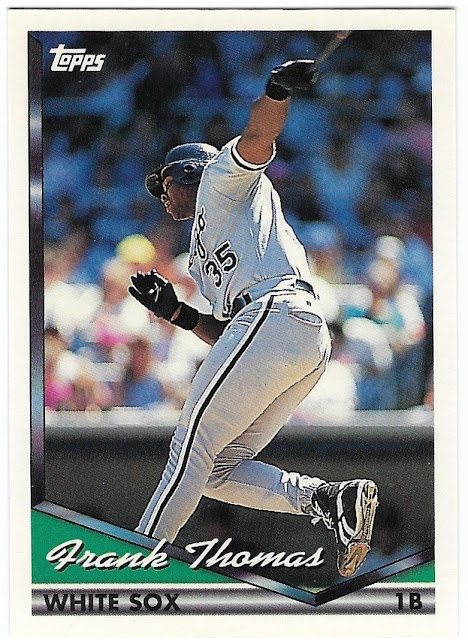 the strike year. many things come to mind when i recall 1994 - tony gwynn (would he have hit .400?), matt williams (would he have hit 62 homers?), the expos (would they have won the world series?), jody reed (did he regret turning down the dodgers' offer which put the wheels in motion for the pedro martinez trade as much as dodger fans came to regret it?), and so on and so forth. one of the other players who comes to mind is frank thomas. the big hurt had a big 1994 season with a 1.217 ops fueled by an obscene .487 on base percentage. it was his second straight mvp award, and his 1994 numbers weren't too far off from his 1993 stats even though he had played in 40 fewer games.
1995 - dave winfield 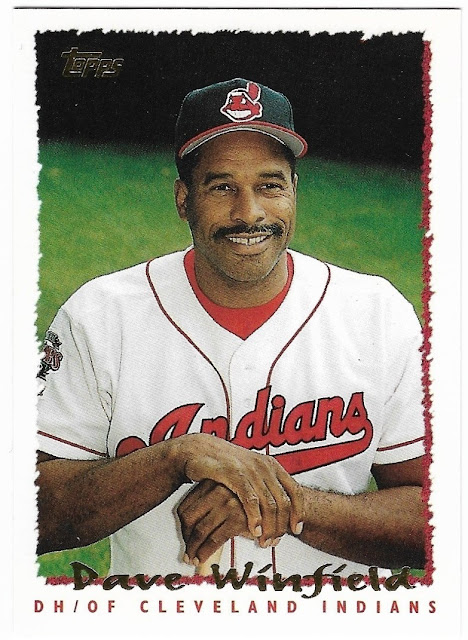 one of the things that gave me hope that the 1994 season would be salvaged was the indians' purchase of dave winfield's ontract from the twins in august of 1994. i figured that the move wouldn't have been made if the season weren't going to resume, given that winfield's contract was up at the end of the season. unfortunately, the season was cancelled. however, i was happy that winfield signed with the indians for the 1995 season and so got to be a part of the team that brought a pennant back to cleveland for the first time since 1954! i don't think winfield was on the postseason roster, but i was definitely rooting for his teammates, including orel hershiser, that fall.
1996 - cal ripken jr 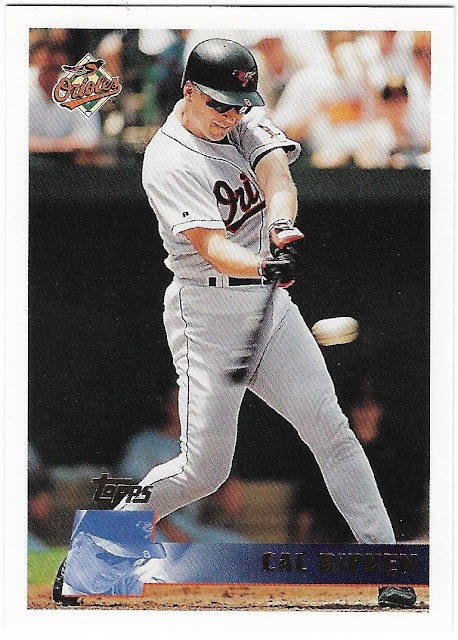 aside from the dodgers winning the nl west for the first time since 1988 and the indians returning to the fall classic for the first time in my lifetime, the highlight of the 1995 season was cal ripken and consecutive game number 2,131. as a steve garvey fan, i learned all about lou gehrig early on, and paid close attention to ripken's streak. 1996 topps has a highlight card that focuses on that event specifically, but i keep that in my "meaningful and just because" mini-collection so i chose this card to represent 1996 instead. ripken reaching game 2,131 was a feat that really had me paying attention to baseball after the strike and loss of the 1994 postseason. i never thought about giving up on the sport, but i don't think it was hyperbole for many to believe that ripken and his streak saved baseball for a lot of people.
1997 - paul molitor 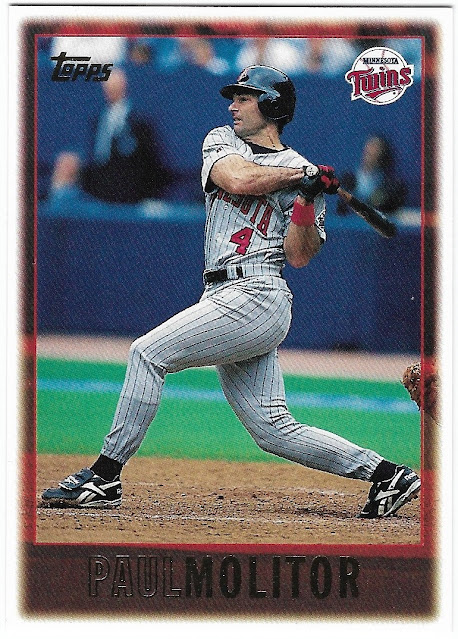 1997 was the year that i moved to minnesota. too late to see kirby puckett play, but in time to catch my one-time favorite non-dodger paul molitor. molitor had signed with his hometown twins for the 1996 season, and he had a fantastic year. in addition to batting .341, he recorded his 3,000th hit towards the end of the season. while his 1997 season was not quite as eventful, he did hit over .300 and drove in 89 runs as a 40/41 year-old. i made sure to catch some games at dodger stadium and the big a before i made my move, but only managed to catch the twins on tv over the last month or so of the season. still, 1997 will always mean minnesota to me.
1998 - mark mcgwire 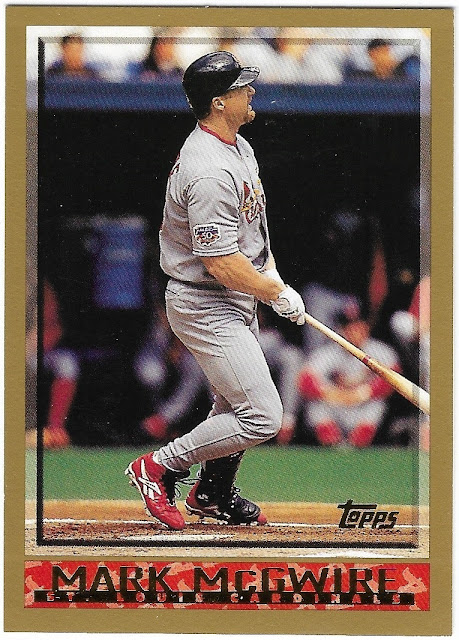 who else but mark mcgwire would be best to represent 1998? sammy sosa, maybe, but it was big mac who set the season record for home runs that year. as luck would have it, the cardinals returned to minnesota in late june for the first time since the 1987 world series, and i was there for one of the games. we were sitting in left field hoping for a mcgwire home run, but the closest he came was a warning track fly ball off of bob tewksbury. i recorded the game in which mcgwire hit 62 and also the game in which he hit number 70 - i was fully on board the home run train at the time. the next year, some friends and i roadtripped to st. louis to see the dodgers play the cardinals for a weekend series, and big mac failed to homer in those games, too. just my luck, i guess.
1999 - nomar garciaparra 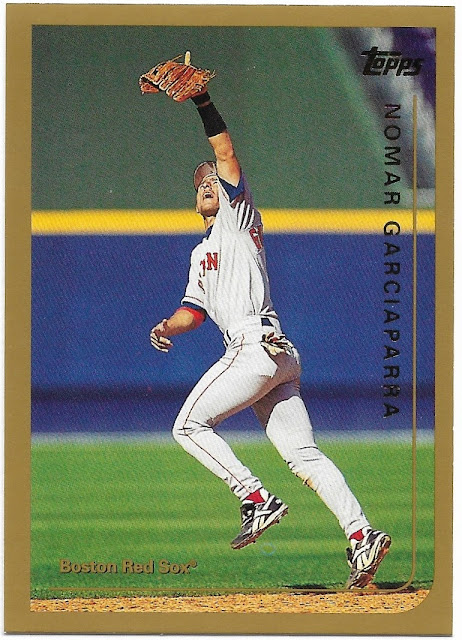 here's another former favorite non-dodger in the collection. the american league shortstop triumvirate of nomar, derek jeter, and alex rodriguez was dominating in the late 90's, and nomar was my favorite of the group. he won his first batting title in 1999 and helped the red sox advance to the alcs for the first time since 1990, although they lost (for the first, but not the last time) to the yankees in a postseason series.  i found myself in boston the weekend before the all-star game somewhat by chance. the red sox weren't in town, so going to a game was not an option, but i did walk past fenway for the first time and bought an all-star game t-shirt. i didn't suggest going to fanfest (we were there to visit extended family), but i was disappointed later to learn that steve garvey had been there. another opportunity lost!
up next, the 2000's represent! stay tuned...
Posted by gcrl at 7:55 PM