2020 continues to show itself in 2021 as tommy lasorda passed away last night. i knew this day was coming, as did most dodger fans. tommy had been hospitalized a few weeks ago, and details were scarce. although he was released from the hospital eventually, it sure seemed as though the 93 year old was not well. 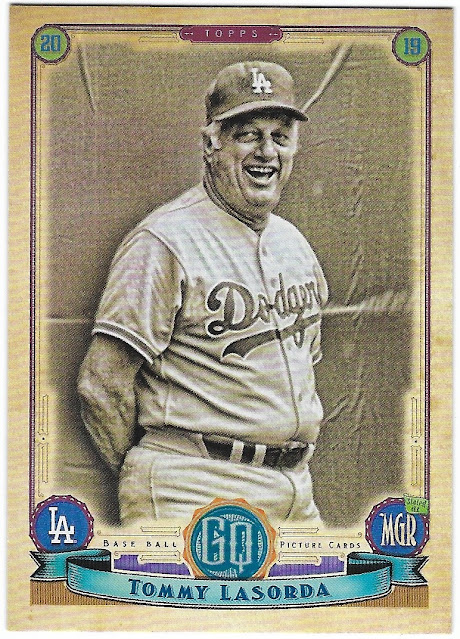 i added this 2019 topps gypsy queen short print card to my collection not too long ago, mostly because i liked the image used by topps. it shows a genuine tommy - not a posed shot.  tommy was the first major league manager i was aware of, and he has always been a part of the dodgers as far as i knew. it is weird to think that today is the first day of my over 50 years on the planet that tommy is not working for the dodgers.
i have so many fond memories of tommy, from his constant cheerleading to his funny translations in some of fernando valenzuela's early interviews to his fervent arguments with umpires and rants to reporters (some of which were recorded for posterity) to just his constant presence at dodger games. i never interacted with him personally in any way outside of a ttm request and yelling and waving at him as a young fan in dodger stadium.  however, i bore witness in person to his exuberance many times. one such time was on august 19, 1991.
this was a game at dodger stadium (it was mother's cookies dodger card giveaway night) against the padres that the dodgers had trailed 1-0 until the bottom of the 8th when they scored twice to take the lead. kevin gross relieved tim belcher and immediately surrendered the lead via a jack howell solo home run (his second of the game), and the game went in to extra innings. gross retired the padres in the top of the 10th inning, and then in between innings, tommy came out of the dugout and started waving his arms around yelling "let's go dodgers" and acting somewhat the fool. my friend and i were a few rows above the dugout at this point, and were loving every minute of it.  next thing you know, mitch webster doubled and eventually scored on a chris gwynn sacrifice fly to end the contest.
here's a link to the article bill plaschke wrote about the game that my friend and i referred to as "the mitch webster game". webster hadn't been in the game until he came on as a pinch-hitter in the 8th and walked, eventually scoring the dodgers' first run before his heroics in the bottom of the 10th. looking back, however, it was just one of thousands of "tommy lasorda games".
Posted by gcrl at 7:55 PM