i'm not fooling about comics this time

back on april 1, i posted an april fool's joke regarding a new blog of mine focused on comic books. while i do still have a fair number of comics, i never intended to write about them on that blog. in the months since, i have instead picked up a few cards that are reminiscent of comic books, and i have no qualms about writing about them!
this is a 2022 donruss mookie betts "diamond marvels" insert 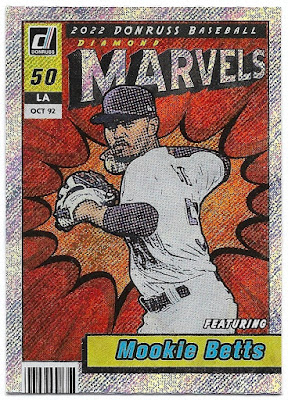 it may be the vector parallel, but i am not sure.
it certainly looks like a comic book cover, and an interesting touch by panini - the oct 92 date refers to mookie's birth (october 7, 1992). or maybe it's just a coincidence.
another betts comic card from 2022 is this one 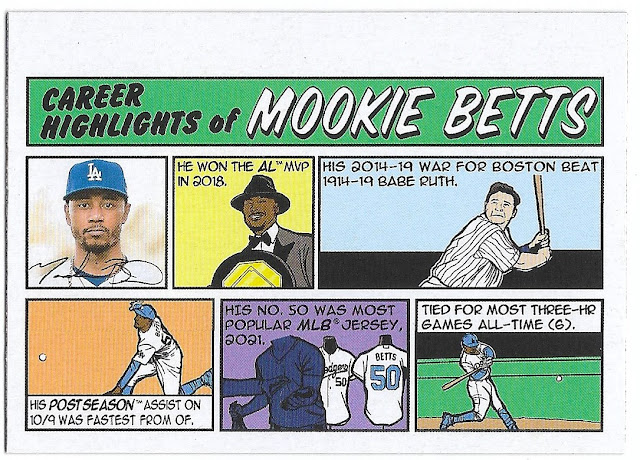 from topps heritage which features some nice mookie trivia and an appearance from babe ruth. the design is attributed to 1973 topps comics which i don't know were really a thing.
bazooka comics, however, have definitely been a thing. i recently picked up another copy of this comic 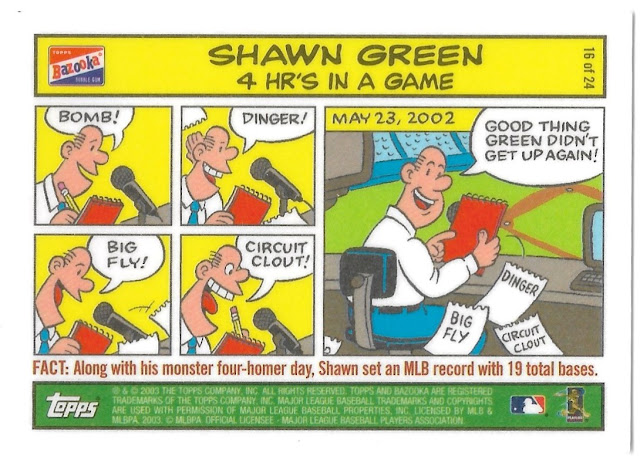 for my "games i attended in person" mini-collection. it comes from 2003 topps bazooka and recognizes shawn green's 4 home run game in milwaukee. the announcer could be one of the brewers' or the dodgers' broadcasters, but i am pretty sure vin scully wasn't traveling to milwaukee anymore back in 2002.
speaking of scully, he was the topic of a recent release from the pop fly pop shop, and i was sure to buy a copy 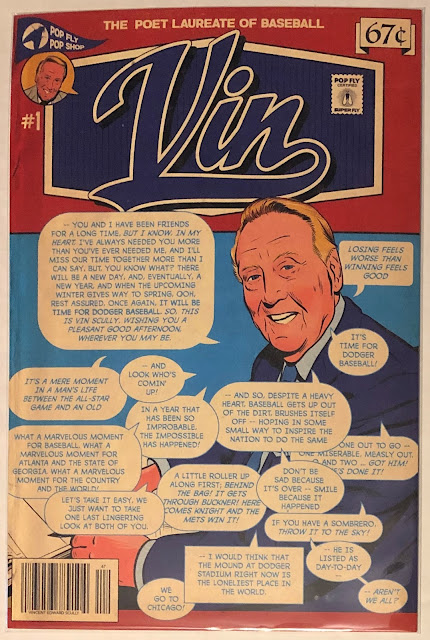 for those of you who don't know, the pop fly pop shop is run by an artist named daniel horine who creates sports-themed replicas of comic book covers. they are a thick card stock product suitable for framing. unfortunately for me, steve garvey was a relatively early subject and i missed out on his release. i first learned about these from collecting cutch, who showed off the awesome dave parker issue.
it's unfortunate that the scully comes with an error - his quote "it's a mere moment in a man's life between the all-star game and an old-timer's game" is left incomplete in the middle left. still, it's a great collection of quotes and i would encourage you to check out the site.
finally, i did pick up a more literal comic book card that crosses over from comics to cards in a different way than the items shown previously in this post 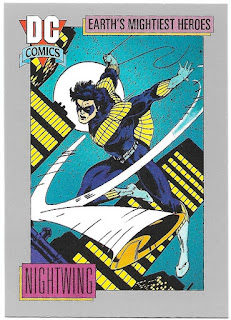 this is a 1992 impel dc card of nightwing, dick grayson's alter ego and leader of the teen titans.  grayson, of course, was the original robin to bruce wayne's batman who forged his own identity and allowed jason todd to take over as robin.  i was a collector of all publications related to the teen titans reboot led by marv wolfman and george perez, and i still have my titans comics including their premier in dc presents and all of the crossovers up until around 1988 or so. i am happy to have a card in my "meaningful and just because" mini-collection to represent comic books that features a character from that title.
'nuff said!
Posted by gcrl at 6:55 PM