for almost 15 years i have had published want lists, and before that i had my binder cards checklist in excel format. at no time did either of those lists include this item as a want or need: 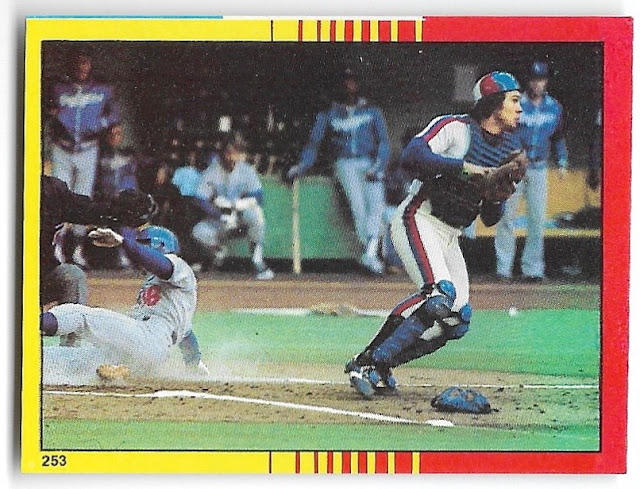 that is a 1982 topps sticker, whose subject is the 1981 national league championship series. it says so on the back: 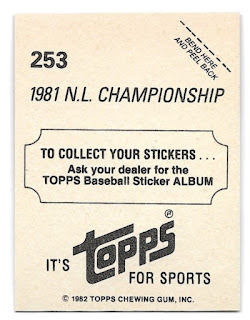 it is not traditionally included in the dodger team set lists that i was aware of - it is most often categorized as a gary carter item instead. however, when i was entering my dodger haves in to tcdb, i saw that this sticker was tagged as a dodger card, too.  what i thought was a complete team set in my collection was no longer such, and so i decided to buy the sticker to add it to my dodger collection.
and why not? there are more dodgers in the image than expos - that's bill russell sliding in to home plate and i can make out ron cey as one of the dodgers in the olympic stadium dugout in the background. since the dodgers won the series, it was easy for me to add the sticker to my dodger collection - in my binder, spreadsheet, and on tcdb. i will mention, however, that i only have one of the 1975 topps world series cards in my dodger collection since they won only one game that series. i recognize my inconsistency but it's my collection.
in 1985, the dodgers horrifically lost the nlcs to the cardinals after being up 2 games to none, and i was happy that there was no card in the 1986 topps set that would make me relive the cardinal fans being urged to "go crazy". i didn't really pay attention to the stickers that were released that year, either, and so just recently added a dodger sticker that commemmorates the playoff series 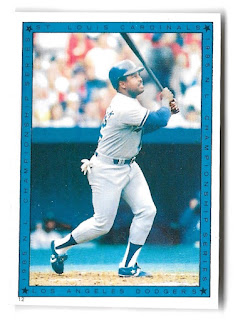 it's a pretty benign representation of the series, with bill madlock getting the honors. it makes sense, as he hit 3 home runs in the six games played, although the dodgers lost each of the 3 in which he homered.
that was the only sticker i was going to add to my collection from the nlcs, but then i found this one in a monster box at a card shop last month 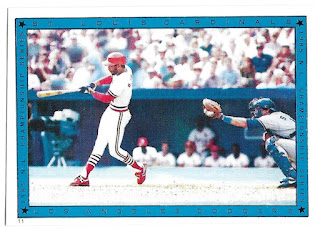 i am 99% sure that this is not ozzie smith's walk-off home run from game 5, and with mike scioscia there behind the plate, i figure it is not too dissimilar from the sticker at the top of this post.  there is a third sticker from the set that celebrates the series, but it shows the aftermath of jack clark's home run (first base was open) and only features cardinals, so i passed on it.
i did grab some other dodger stickers from the set

most of the dodgers are matched up with orioles, with the exception being jerry reuss. mike marshall gets paired up with future friend rick dempsey.
it's been a long time since i've added a greg brock item to the collection, but here he is with one of my almost favorite non-dodgers fred lynn

mike scioscia is there with old friend lee lacy, and we get another madlock sticker to round things out. i believe i am only missing the ken howell and orel hershiser stickers now from my team set.  for what it's worth, the guy at the lcs gave me these 1986 stickers for free. huzzah.
back to 1982, i also decided to add a couple of the stickers from that year to my steve garvey collection.  the dodger team received a two-sticker layout celebrating their 1981 world series championship, and the garv is featured on this half he's there in the second row next to longtime trainer bill buhler.  of course i also added the o-pee-chee version: 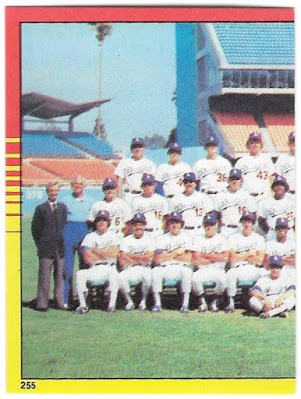 it was very strange to me back in '82 when there were no postseason cards in the flagship set. i though 1979 was just an anomaly when topps brought the subset back in 1980 and 1981. i guess maybe they wanted to create a draw to the sticker set by making those items exclusive starting in 1982? if that were the case, it didn't work on me as it took me 40 years to add a couple of these to my collection.
in closing, let's move on to more modern stickers 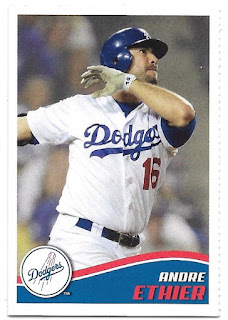 that is a 2013 topps mlb album sticker (i will just call it a 2013 topps sticker) of andre ethier. it was the last of the 2013 dodgers i needed to complete the team set. a great way to bookend this post. huzzah!
Posted by gcrl at 6:55 PM