i missed the memorial patch for bobby bragan

nick from dimeboxedonia sent me some cards early in the summer. being a fellow vladimir guerrero collector, that usually means i am in store for some new vladdys for my collection. nick didn't disappoint, sending these nine new to me cards: 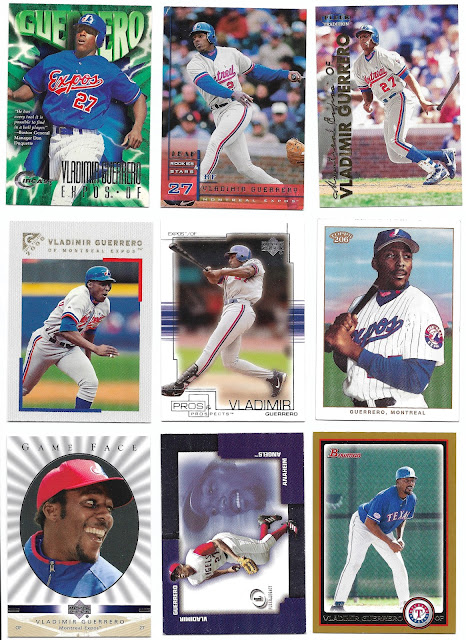 these cards cover just about guerrero's full career from montreal to texas - no oriole cards, unfortunately. what i added to my collection includes 1997 fleer circa, 1998 leaf rookies & stars, 1999 fleer tradition, 2000 topps gallery, 2001 upper deck pros & prospects, 2002 topps 206, 2003 upper deck game face, 2004 fleer legacy, and a 2010 bowman gold parallel.
all great cards, but it was the bowman that really caught my eye 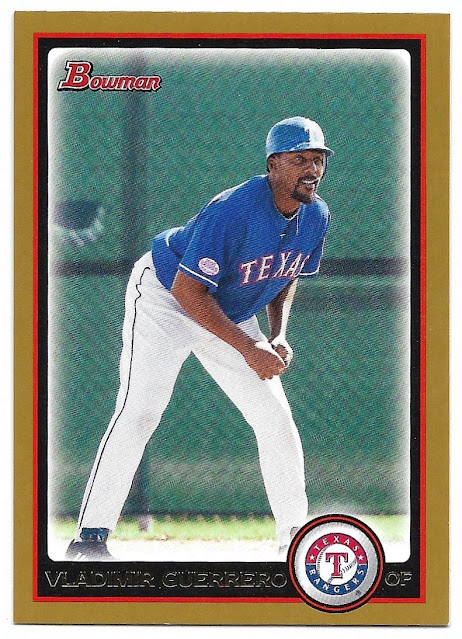 i didn't recognize the patch on guerrero's right sleeve, so i went digging. i found a better view of it at getty images: 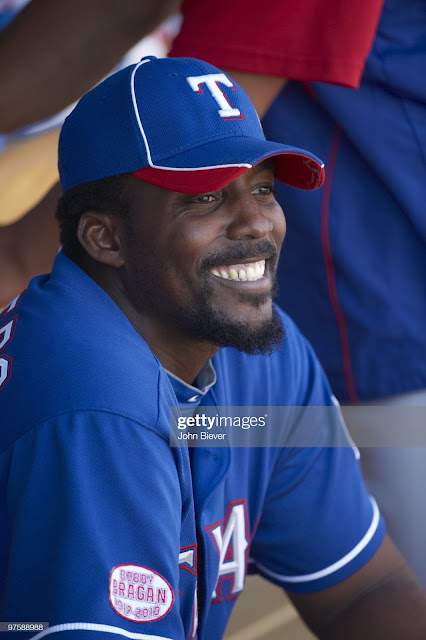 it's a bobby bragan memorial patch! the text reads "bobby bragan 1917-2010" as bragan passed away on january 21, 2010 - just a few weeks before the start of spring training. i had no idea that the rangers wore patches to honor the former dodger player, minor league and major league manager, texas league president, and longtime ranger front office employee, and so i am happy to add a card to my memorials collection.
of course, i went looking for a card that showed the patch a bit better, and settled on a 2010 bowman chrome refractor of vladdy 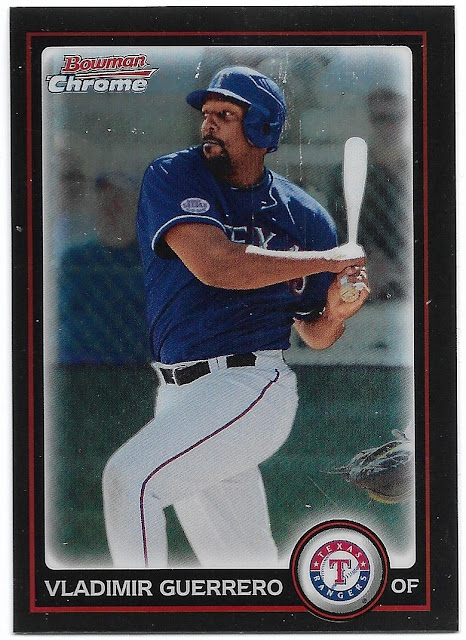 not the cleanest scan, but it will do.
bragan may be best known by many to have been one of the players who requested a trade from the dodgers when jackie robinson was added to the roster. he later rescinded that request and was a teammate of robinson's in both 1947 and 1948. he later managed in the majors and minors, including a couple of stints in the dodger organization where he encouraged maury wills to become a switch hitter.
he left the dodgers after serving as walt alston's third base coach in 1960 to join the expansion team in houston as their farm director, but after a couple of years he found himself managing the braves in their last few seasons in milwaukee and their first in atlanta. after that, he went to lead the texas league and eventually joined the rangers in a public relations role in 1979, beginning what would become a 30-year stint in their front office.
i think it's great that the rangers celebrated the life of a baseball lifer with the patch, even though it was only worn during spring training.
nick included other cards for my dodger collection, including a couple of 1980-87 sspc baseball immortals of two other jackie robinson teammates - pee wee reese and don drysdale 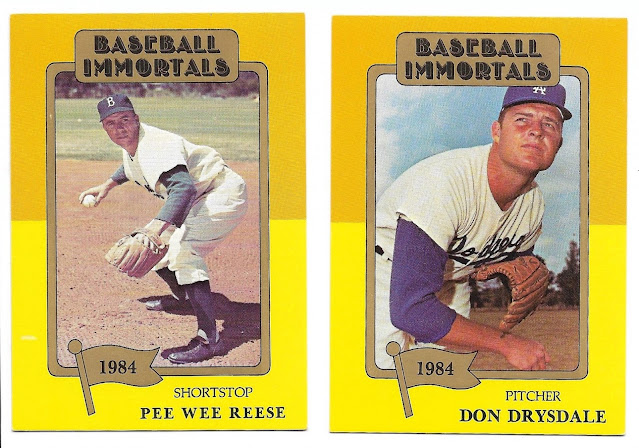 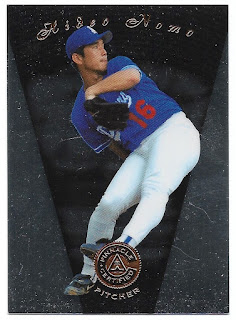 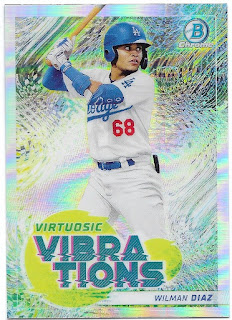 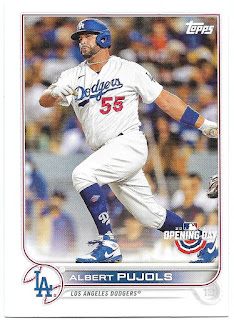 i want more pujols dodger cards! speaking of which... 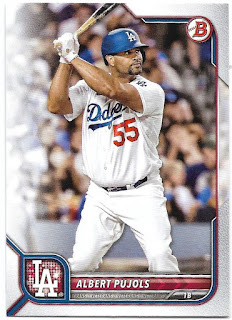 that 2022 bowman pujols arrived in my mailbox last friday - the same day pujols hit home runs number 699 and 700. i figured i would add it to this post and congratulate pujols on the milestone. it was cool to see adrian beltre and dave winfield in attendance, with beltre being included in the celebration.  now back to more cards from nick.
nick and i share another mini-collection (along with jeff from 2x3 heroes wherever he may be), and that is cards showing the double play turn at second base. i received a few new ones for my collection, including this 1993 topps stadium club toys 'r' us box set carlos baerga card 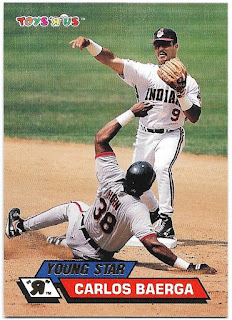 and these six beauties 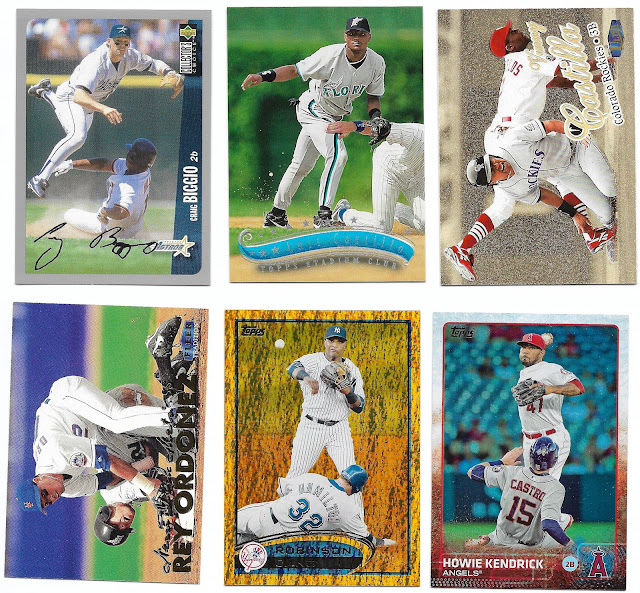 four of which are parallels.
great stuff as always nick - thank you!
Posted by gcrl at 6:55 PM