it's better to burn out than fade away

the issues of fading and bleeding autographs in the otherwise outstanding 2007 upper deck sweet spot classic set is well documented. it is a shame that some great signatures and combo signatures are so badly ruined.  steve garvey was included in the set, and i've acquired most of the variations of his cards.  several months ago, i added a couple more to my collection.
this first one was advertised as a silver stitch gold ink signature. 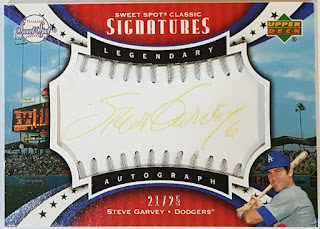 it's numbered to 25, and it confuses me. the fact is, according to the checklist there were no gold ink versions on baseballs - it was only used with wood and leather parallels. instead, the silver stitch cards were signed with black ink. is this actually a faded black ink signature? if so, i am glad that it is still legible and actually looks pretty good, especially compared to some that i've seen that are almost blank today.
the other version in the lot that i needed was this blue ink leather signatures card 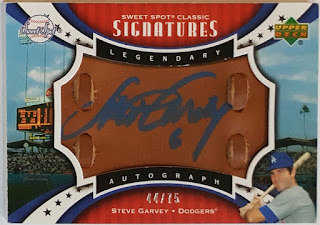 with an autograph that remains bold. i am down to needing just a couple of cards from this set that have a print run of 6 plus four 1/1 versions. i doubt i will add any of them to my collection at this point.
four years after that set was released, panini included garvey in their 2011 playoff contenders set with a similar sweet spot autograph 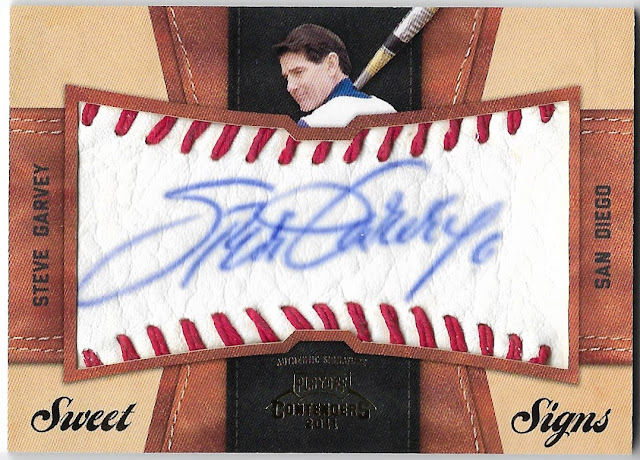 of course, they called it "sweet signs". this one is also numbered to 25 and i was happy to find it a few months ago with a reasonable buy it now price even though it also looks like it might be suffering from some bleeding of the ink. here's the back: 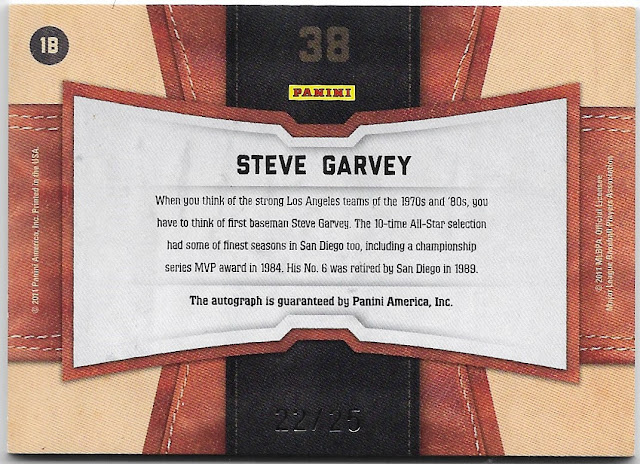 it's technically a padres card, although the garv looks to be wearing some blue in the (tiny) photo. the most interesting part of the photo, however, is that he is holding an aluminum easton bat. you don't see that too often.
here's hoping your collections stay strong and your autographed cards don't fade away.
Posted by gcrl at 7:55 PM