i woke up this morning to a text letting me know that vin scully had passed away. he was 94, and i knew this was coming given his absence from the gil hodges number retirement ceremony but even so it took a while for the news to sink in.
i've had this 2013 panini cooperstown matrix parallel card 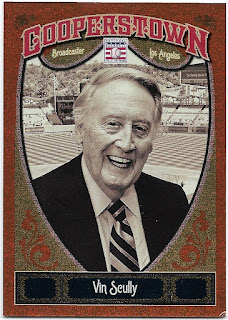 in a draft post for awhile - waiting for today perhaps? it's a sort of obnoxious looking parallel, which doesn't suit scully at all.
all of the anecdotes you hear about people in southern california of a certain age in regards to the dodgers, scully, and transistor radios are true. i am living proof of that.
i will share again an essay i wrote for eric neel at espn back in 2005. eric didn't wind up using it in his article, but i am glad he prompted me to write it.

Glad to be able to share and help. I apologize in advance for the verbosity.

Answering your first question - I don't know if his voice inspires thoughts for me separate from baseball, but it is certainly a catalyst for non-baseball related memories and reflections through the baseball related memories it conjures. Vin's voice is absolutely a connection between my present and my past (and hopefully, my future), all of which are much (although sometimes not too much) more than baseball. It takes me back to my youth in Santa Barbara county, and my college years in southern California. It reminds me of so many things, but, as I mentioned in my Dodger Thoughts post, the first things I think of when I hear his voice are the late (for a 8 or 9 year old) nights, spent sitting at the dining room table with my dad and his transistor radio, watching him finish some paperwork while Vin and Ross and Jerry told their tales. It also reminds me of my late grandmother, who didn't know much about baseball, but knew who Vin Scully was, and would always say "that must be ol' Vin Scully" when she would hear the radio broadcasts we were listening to. Of course, I am also reminded of the trips we made as a family to see the Dodgers play, and how we would always take the radio into Dodger Stadium with us (just like everyone else, it seemed). So, I suppose that his voice is a gateway to thoughts and memories for me beyond just the game of baseball itself.

Because of the connection I have with him and my past, there is definitely a safety and comfort factor that cannot be denied. Baseball is a sort of escape for me, I suppose, and hearing him call a game is about as safe and comfortable as I can imagine being for 3 or so hours. After moving from Orange County to Minneapolis (an American League town, for goodness sake) in 1997, I decided to road trip to see the Dodgers once a year. In 1998, I went to Wrigley for the first time, and I was more excited about seeing Vin again (even though I couldn't hear him) than I was about seeing the actual game. Last year, I went to Fenway, and was thrilled that he made the trip. He threw out the first pitch one night, and I got one of my favorite souvenirs from the trip - a picture of me, Sandy Koufax, and Vin. Granted, they are on the field in the background, and I am behind the dugout up in the stands, but still, we were in the frame together. Anyway, this is the first year since I moved here that I have purchased the indemand baseball package, and so have had the ability to hear him regularly, and the memories have been overwhelming at times. It has also given me the opportunity to introduce him to my 5 year old. I cannot tell you how stoked I was the other night to be sitting on the couch with my son at my side, watching Dodger baseball, and listening to Vin Scully.

Your second question is a great one. There are many things I enjoy, among them the daily greeting: "hello, and a very pleasant good evening to you, wherever you may be." this holds more meaning for me now that I am in Minnesota. There is also the way he (and the camera crews) find and describe the children in the stands. He always has kind words, and often something creative to say about the "tow headed youth" or the kid that lost his ice cream cone. It makes me wonder if I were one of those kids that he saw 28 years ago, and what did he have to say about me in my Steve Garvey shirt? I have also come to enjoy his mid game reminiscences of "this day in Dodger history", not just for the information he provides, but the way he smiles, sometimes winking, and says "let's get back to this one" when he's done. It's like we went to the kitchen to get a beer together, had a little conversation, and then realized the next inning was upon us. And then there are the stories he tells each night, the history lessons.

These are probably my favorite things that he provides. One reason I love the Dodgers is that it is easy to trace back from the team of my youth to the teams my dad followed, and even back to Brooklyn, in very few steps. For example, you could essentially go backwards from Russell to Wills (ignoring the time he spent with other teams in the late 60s) to Reese at shortstop. To get to Russell from Izturis would take a few more steps, to be sure. In the booth, however, there has been Vin Scully. He is the direct link that I have to the history of the team, and really, the game, that I love.

I have to add that I also love him for his ability to watch and call the game (fairly, I might add - no homers here), and tell his stories while at the same time being very attentive to the TV feed that the rest of us are watching. It's quite frustrating when the announcers are oblivious to what is appearing on TV, and Vin is able to incorporate what is being shown into whatever else he is describing. I am sure it is harder than it seems, given the fact that he is the only one I have seen who does this.

today i join baseball fans from all over the world in remembering vin scully. i wish him a very pleasant good evening and thank him for the memories.
to vin, the greatest of all time.
Posted by gcrl at 6:55 PM