variations on some themes

2020 topps series 2 is out and almost here (hopefully, anyway, as i took a look at target on saturday to no avail but i did order a box online), so i figured it was time to show some series 1 cards that i have added to a few of my mini collections. first up is one of the legends photo variations that topps like to treat us to.  here's the wizard of oz 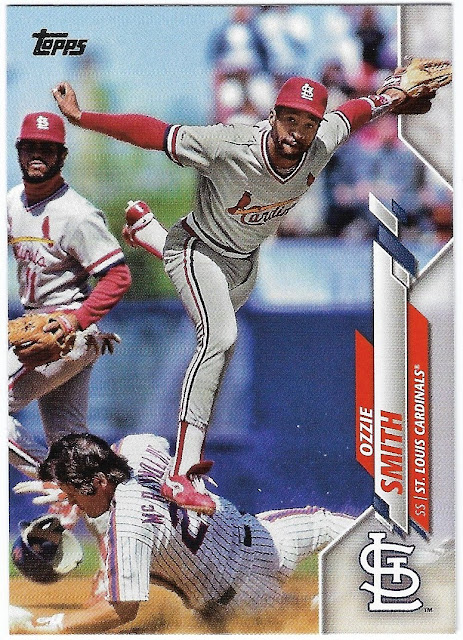 a nice double play turn with the appearance of kevin mcreynolds getting stepped on. i am guessing that ozzie cleared mcreynolds with his leap and did not, in fact, dig his spikes into the back of the sliding metropolitan. 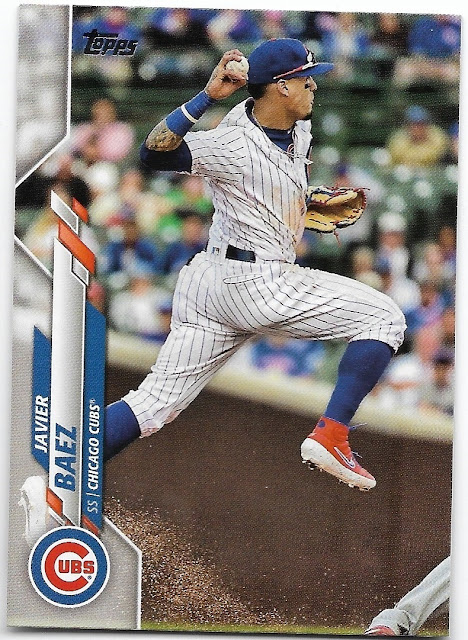 had that sliding player's leg not been in the frame, i would not have pursued this card. i am a slave to my collection!


next up are a couple of inserts for my dodger stadium collection. the first is one that pains me - it's the red sox decades' best teams card 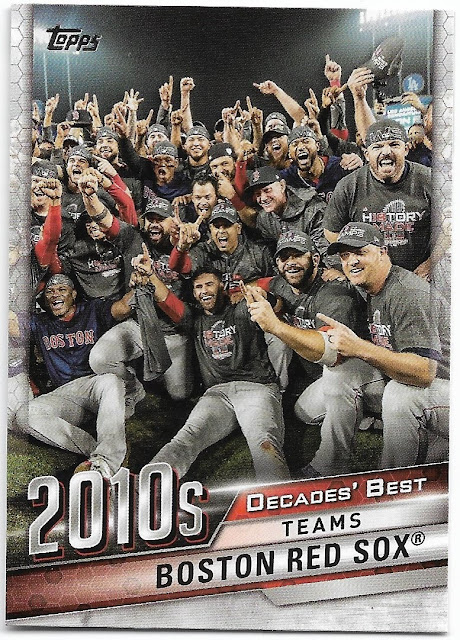 there's a little bit of the right field scoreboard showing behind the 2018 world champions. i believe the last time the dodgers celebrated at home was in 1963. they came close in 2017 but we won't talk about that right now.

when i learned of this insert set, i was naturally hoping for the 1970s and/or 1980s dodgers to be featured. they were not, but maybe in series 2?  they did get a card for their 2010s dominance 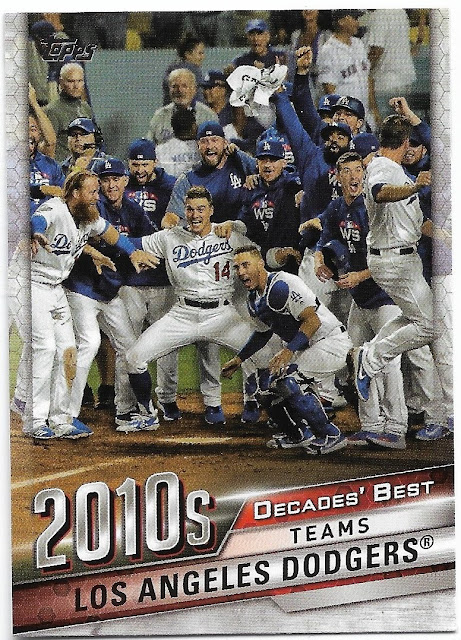 that photo, with kiké hernandez front and center, was taken as the team awaited max muncy who was rounding the bases after hitting a walk-off home run in the marathon game 3 of the 2018 series. david freese, who knows a little bit about hitting walk-off home runs in the world series, is jumping there at the right.

next up is a card that could fit in multiple mini collections. it's the anthony rizzo photo variation card. 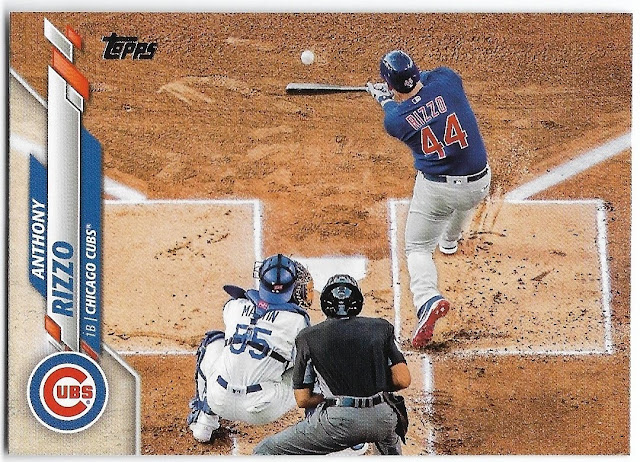 it's a tatooine card, yes, but it is also a lurker card thanks to russell martin squatting behind home plate. and given the fact that martin is catching in his home whites, this is also technically a dodger stadium card. in the end, martin trumps tatooine, and the card goes in the lurker binder.  i hope this isn't martin's only appearance on a 2020 card, but it may very well be.

i've added a number of other cards to these mini collections this year, so i'll take the time to show a few more. first up is a 1993 upper deck darryl strawberry "on deck" card 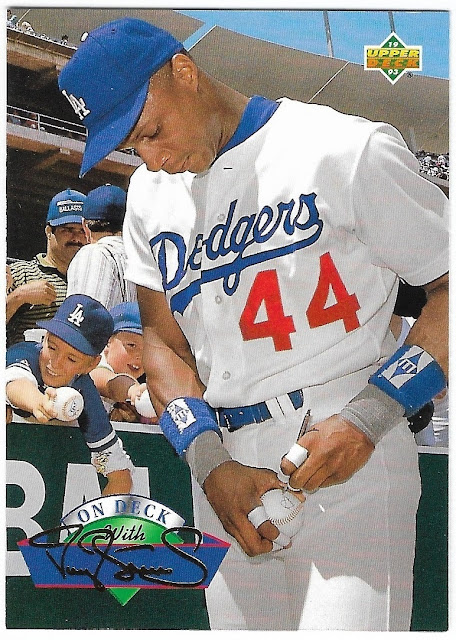 i was going through some dupes this spring and just happened to check to see if this card had made it in to my dodger stadium binder. it had not, despite the fact that darryl is signing autographs right in front of one of the old field level scoreboards.  in fact, he is signing a ball, with another ball being offered to him, in front of the "ball" text on the scoreboard. meta. 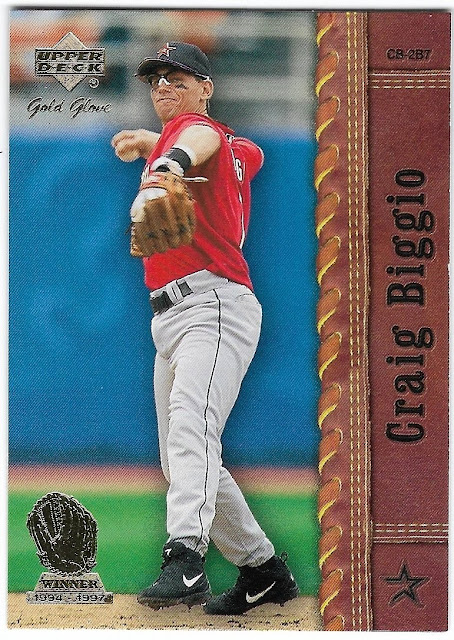 there are a couple other cards from this set with better images of the dodger stadium outfield wall murals than this one, but it still counts. the "3" to the right of biggio is, i believe, the "3" in "32" for sandy koufax.

there was another koufax appearance on the murals in 2003. this 2004 topps total dave roberts card 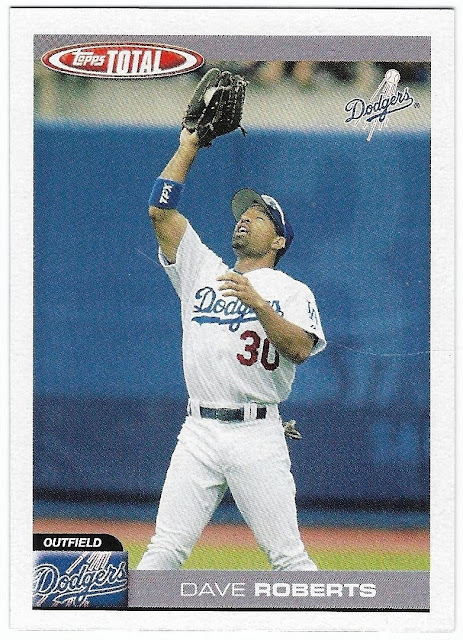 shows the "3" in "382" as in the number of strikeouts koufax recorded in 1965 to set a major league record that still stands today as the national league's high mark.

i can't ignore cards that feature dodgers in the background, even if they are cards that commemorate the 2017 world series. i have a special disdain for george springer (he had a great series, but like the whole title, it is tainted now), but i did add this card to my lurker collection since austin barnes is there in the frame.

last card for today is a double play turn from 2019 topps chrome. 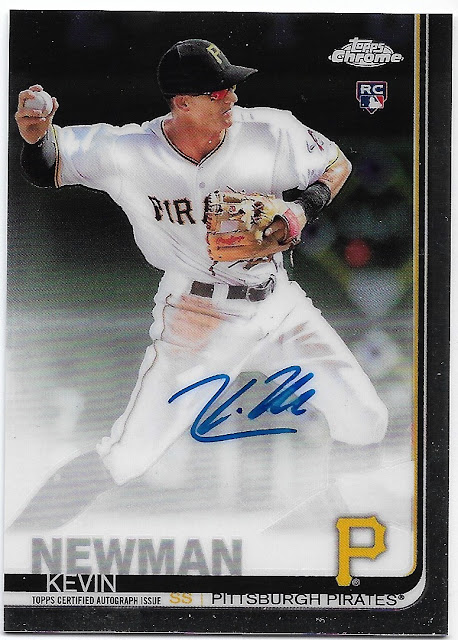 rookie autograph mojo for kevin newman. it's tough to see, but there is a player sliding in behind all that fog.

part of the fun for me with new releases is scrolling through images and seeing cards that fit into my collection. a quick look at series 2 tells me that it won't disappoint! my first priority is to get the first topps cards featuring pete rose and steve yeager (both as "lurkers") in years. i can't wait for my box to get here on friday!
Posted by gcrl at 7:55 PM