russell martin and a love supreme

it's valentine's day, pitchers and catchers have largely reported to spring training, and love is in the air.  one catcher who is not reporting is russell nathan jeanson coltrane martin. the backstop who was cool enough to carry the burden of being named after jazz lord john coltrane turns 37 tomorrow, and may not be suiting up in the tools of ignorance again. i've seen in the last week or so that the a's may have some interest in martin, but as of now, he is unsigned.

i don't keep up religiously with dodger double dippers anymore, but like matt kemp in 2018, i'll salute russell martin with a post in that vein, as i was a fan.

martin began his dodger career in 2006 and helped fans like me put the jim tracy and paul loduca/jason phillips years to bed.  beyond solidifying the catcher position, martin was part of a rookie insurgence along with kemp, andre ethier, james loney, jonathan broxton, and chad billingsley that was a welcome development for dodger faithful. a couple of months in to his career, martin was catching greg maddux and in september of that year, he hit home run number 3 in the miraculous 4+1 game against the padres.  here's a card from russell's first stint with the dodgers. 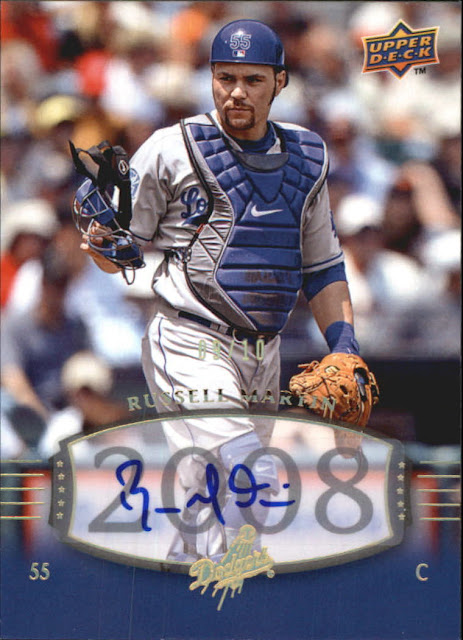 that's a 2008 upper deck timeline timeless teams autographed card of martin numbered /10 that i picked up for way too cheap last year.

martin helped the dodgers get to the postseason in 2006, and while they still weren't able to advance, we knew brighter days were ahead. he was an all-star and a gold-glover in 2007, and also won the silver slugger that year, and in 2008 he helped the dodgers win a postseason series for the first time since rick dempsey was able to run out to the mound from behind the plate in october of 1988.  unfortunately, the dodgers determined martin to be expendable following the 2010 season, and he signed on with the yankees. after two productive seasons there, he returned to the national league with the pirates for a couple of years, and then spent four years playing for the blue jays in his native canada.

here's a card from his time in toronto: 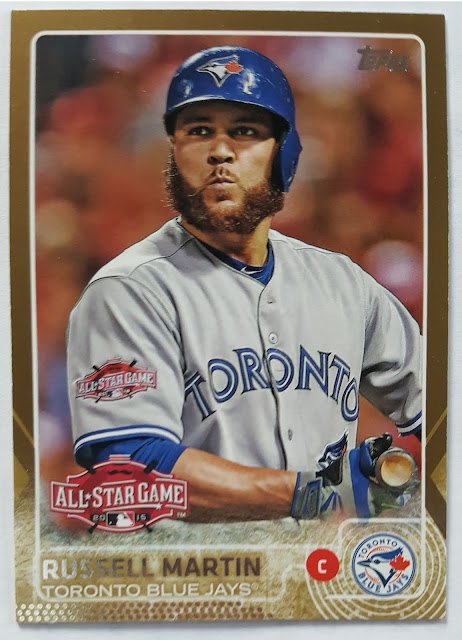 that's a 2015 topps update gold parallel card showing martin at the all-star game. he reached a career high in home runs in 2015 while helping the blue jays reach the postseason and the alcs for the first time since 1993.

having lost yasmani grandal to free agency following the 2018 season, the dodgers traded for martin in january of 2019 to serve as a backup to austin barnes (and eventually, will smith).  he wound up appearing in just over half of the dodgers' games last year, including four appearances on the mound where he finished four games, three of which were dodger victories, and one of which was a shutout. in all, martin pitched four innings, gave up no runs and only two hits, and struck out two for good measure.

he also provided some highlights at the plate, including his ninth-inning, two-out, two-run, game-winning single against the cardinals on august 7th. i did not pick up the topps now card from that game, knowing that there would have to be a martin card in 2019 topps update.  i was not disappointed: 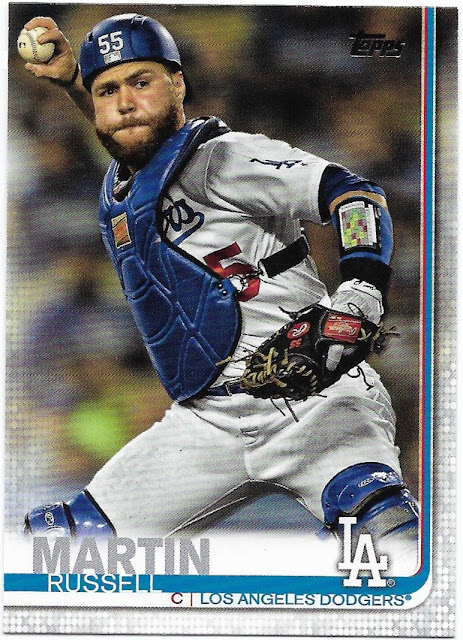 martin has had some great cards during his career, and this is one of them. it even features a nice look at the cheat sheet on his forearm.

martin brought us dodger fans one last moment to cherish in the 2019 nlds with a go-ahead two-run double in the 6th inning of game 3. he later added a home run in the game, and all signs pointed to the dodgers being able to win one more game to eliminate the nationals. we all know now that that did not happen, and it appears that series may well turn out to have been the end to russell martin's career.
Posted by gcrl at 7:55 PM