there's always a lot going on here in the blogosphere. the easiest way to participate, outside of posting itself, is to leave comments. i am guilty of not commenting often enough on the blogs that i read, and i certainly don't expect everyone who reads my posts to leave a comment. except for fuji - the blogosphere's most frequent commenter! seriously, thanks fuji!
there are other ways to participate, and the result is often trophies in the shape of cards!  case in point, chris at the collector recently asked for help with photoshop while he was setting up his new blog the 1993.  i volunteered my amateur skills, and was rewarded with some cards!
chris sent me this 2016 topps archives 65th anniversary frank howard card 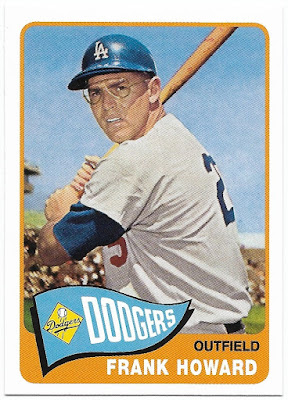 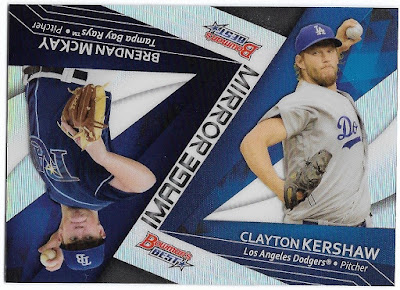 just for helping a blogger out!
earlier this year, free card fridays became a thing thanks to jon, brian, rod, kerry, and others, and they have continued to pop up throughout the ensuing months. this is another way to participate in what the community has to offer!
i recently received cards that i claimed on these posts from the aforementioned jon - a 2015 topps chrome joc pederson prism refractor 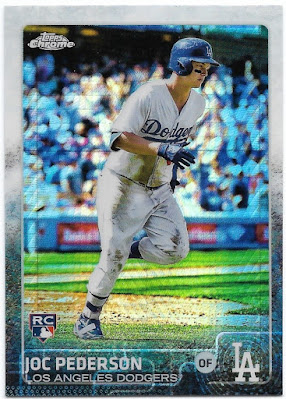 jay at card hemorrhage also offered up some cards, and i scored a 2002 topps 206 stan musial card 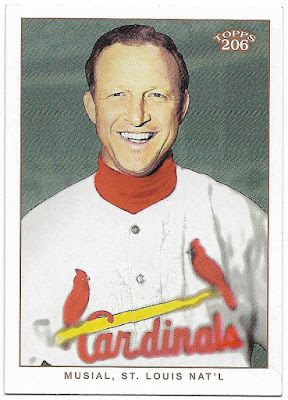 for my set build that is 18 years in the making!
kevin the diamond king also offered up some cards and i requested and received a 2018 bowman draft luis robert card 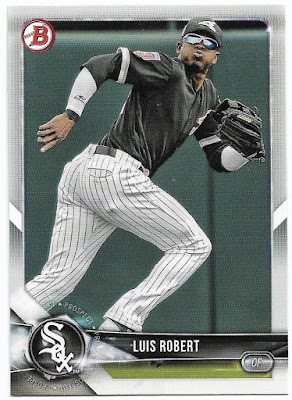 kevin also held a contest recently (another way to participate in the blogosphere), and i came away as the lucky winner of this card: 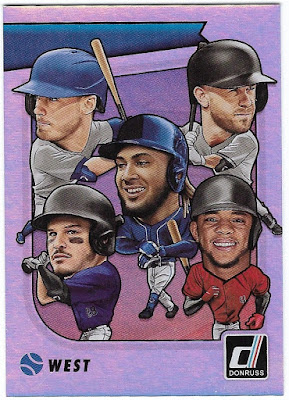 that's a 2020 panini donruss divisions insert featuring the national league west. that's cody bellinger in the upper left, and he is joined on the card by nolan arenado, fernando tatis jr, ketel marte, and evan longoria. longoria is an odd choice for the giants, but who am i to judge.
kevin sent more cards for me along with the contest prize, including a six pack of vladimir guerrero 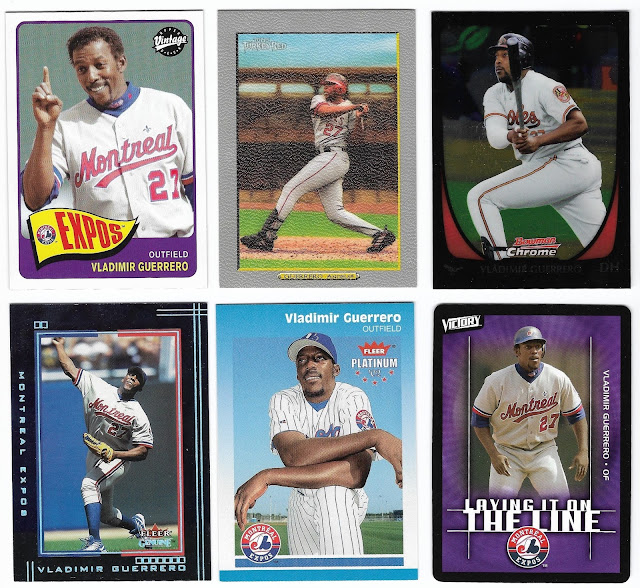 that included three of the four franchises for whom he suited up. i still wish the blue jays (his fifth franchise) had called him up in 2012. oh well.
group breaks have been around for a long time with many bloggers (including yours truly) hosting them at various times. one of the most venerable group break hosts is colbey at cardboard collections. his affordable breaks offer up a great variety of releases from the past and present.
i recently participated in a spate of breaks hosted by colbey that netted my some great cards from 1994 fleer flair. 1996 topps laser, 1997 leaf limited, 1999 pacific crown collection, and 2020 topps stadium club.
this mike piazza infield power insert is from 1994 flair 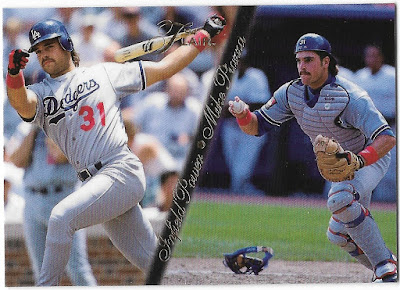 and this piazza card is from 1996 topps laser. 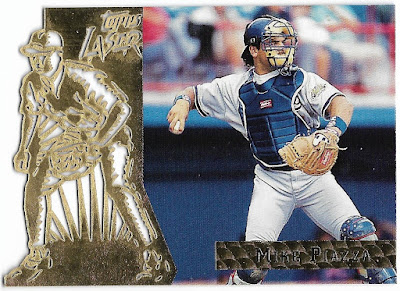 other dodger cards i received in that break were those of ismael valdes, hideo nomo, raul mondesi, and eric karros. 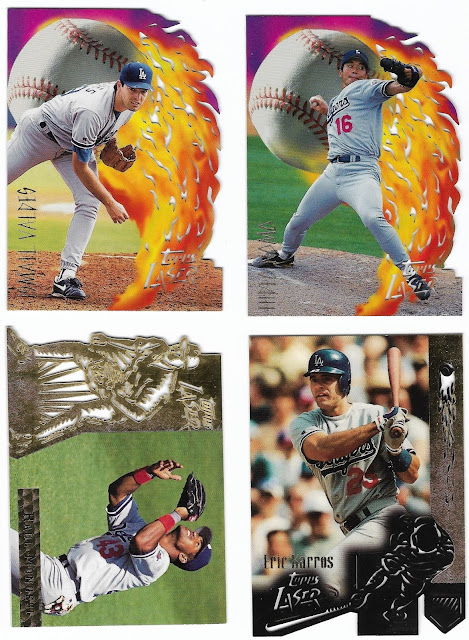 that's a complete team set, but unfortunately i didn't hit any of the inserts.
here's a trio from 1997 leaf limited

along with another mike piazza insert 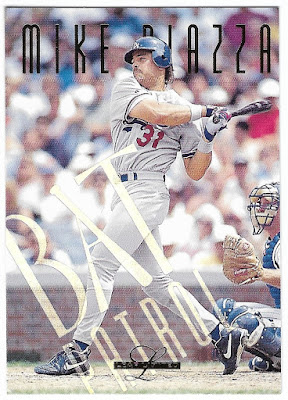 pacific is always a fun product, and i was able to cross this antonio osuna card 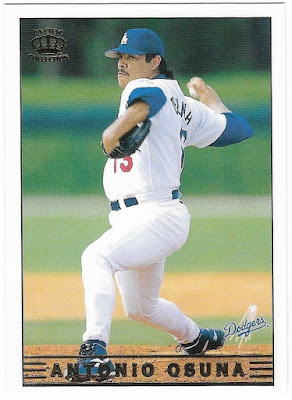 off of my want list.
colbey held a random 2-team break of stadium club and i wound up with the brewers and rays. as a result, i picked up a couple of lorenzo cain cards 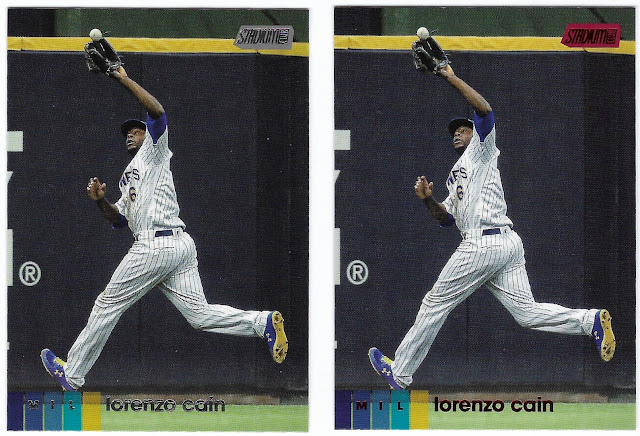 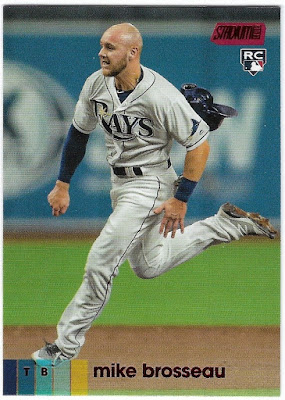 he's the dude that hit the 8th inning home run off of aroldis chapman in the alds this year that sent the yankees home.
against my better judgement, i also entered a couple of colbey's football breaks. from 1995 topps stadium club, i took the vikings and jaguars and wound up with a sizeable stack of cards. this, in fact, may be the first time fuad reveiz has been featured on a blog anywhere, so here you go: 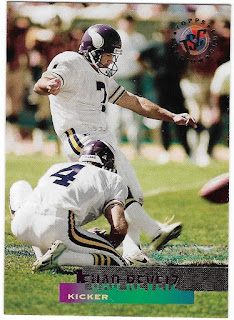 i actually followed the jags for a few seasons, and was happy to find a mark brunell card in my stack 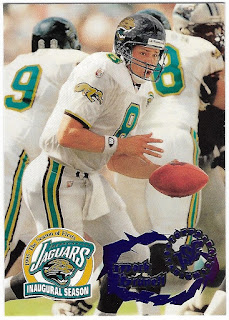 i took the jags again in a 1997 pacific litho-cel break, and wound up with a keenan mccardell litho card 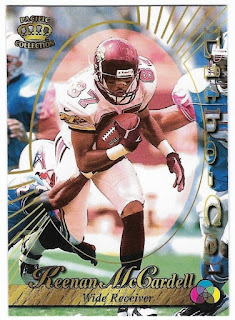 (no cel, unfortunately), and a jimmy smith game time insert 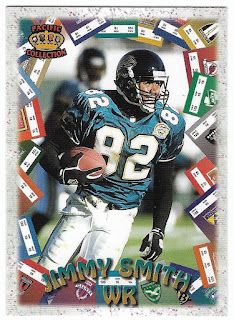 all that was missing was some fred taylor goodness!
and then there are the straight up trades that pretty much every blogger is up for. i've completed a number of them over the last few months, and i am working on catching up with my "thank you" posts for folks like brad's blog, baseball cards come to life, remember the astrodome, the collective mind, cards on cards, baseball dime boxes, night owl cards, 2x3 heroes, and others. i will catch up eventually, unless anyone wants to trade?
Posted by gcrl at 7:55 PM